Belize economy growing at less than 1% 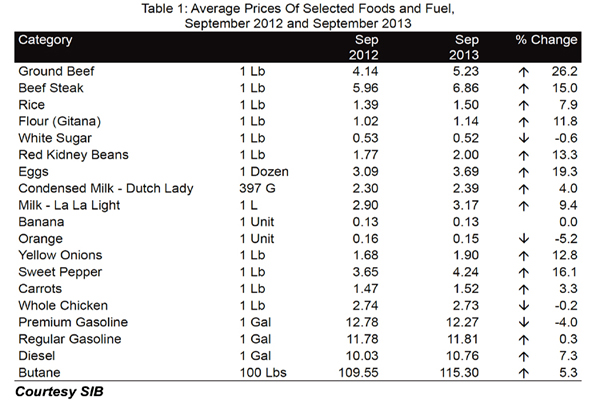 The Belize economy has been growing only moderately for 2013, according to data just released today by the Statistical Institute of Belize (SIB).

It reported that “…in July through September this year, the economy expanded by 0.3 percent when compared to the same period of 2012. This puts the cumulative economic growth for the first nine months of this year at 0.4 percent.”

Low performance in two important sectors—agriculture and oil—largely accounted for the near freeze in Belize’s economic growth.

“In the agriculture sector, banana production, in particular, fell by 6 percent, offsetting gains in livestock and poultry production. Oil production, meanwhile, fell to its lowest third quarter level since 2009, and it appears that it will continue to trend downwards for the foreseeable future,” said the report.

There was good news about the performance of the electricity and water sector. The SIB said that it stood out as the best performer, rebounding by 20 percent after four consecutive quarters of double-digit decline.

Meanwhile, it reported that the hotels and restaurants sector grew by more than 7 percent, making it the second largest contributor to the economic expansion.

“This performance was buttressed by an increase in overnight tourist visitors and a partial recovery in cruise arrivals,” said the report.

Last year, cruise arrivals sank to the lowest third quarter level since 2008. Government services expanded by 4.4 percent—double the growth of wholesale and retail distribution and one and a half times that of construction, the SIB said.

The SIB noted that, up to September, imports from Mexico were more than ten times higher than in the same period last year.

“This was attributed to price increases in the categories of transport (up by 4.0 percent); housing, water, electricity, gas and other fuels (up by 0.8 percent); and food and non-alcoholic beverages (up by 1.9 percent), which were offset by lower clothing and footwear prices and insurance premiums,” the SIB said.

Of note is that the first nine months of 2013 recorded 0.3% inflation.

Food prices were up by 2.3% – with the most notable changes being in the price of beef, rice and vegetables, the SIB said.

The SIB reported that the highest rate of inflation was seen in Belmopan (up by 2.5 percent), and the lowest in San Ignacio (up by 0.5 percent).

Interestingly, negative inflation – a decline in prices by about 0.7% – was recorded in Orange Walk Town.