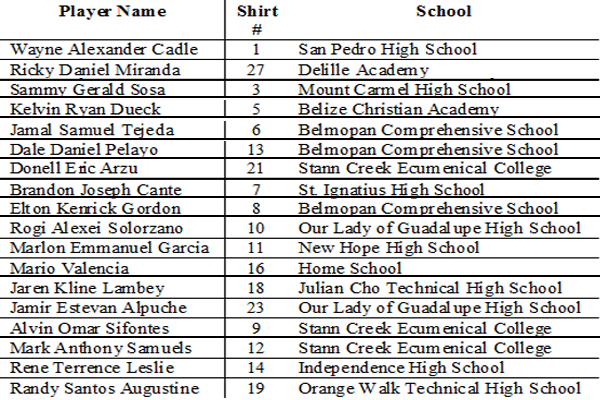 Yesterday, the Football Federation of Belize (FFB) released the final eighteen (18) player list for the UNCAF U-16 Championship 2013 which will be hosted in Belize at the FFB Stadium in Belmopan next week, with games daily from Monday to Friday, November 18 – 22.

On October 24, the FFB released a list of 26 players who were reportedly in camp to prepare for the upcoming tournament. That list has been reduced to the final 18 who will represent the Jewel in next week’s UNCAF U-16 Championship.

The tournament will not involve any playoff, but will follow a simple points system (La Liga style), with the winner being determined by total points received and, if necessary, goal difference and total goals scored.

(Ed. Note: According to information previously provided by the FFB, the final list of 18 has 5 players from Belmopan, 2 from Orange Walk, 2 from Dangriga, 2 from Placencia, 1 from San Pedro, 1 from Roaring Creek, 1 from Cayo, 1 from Benque, 1 from Spanish Lookout, 1 from Pomona and 1 from Punta Gorda. Regardless, we are one nation, and you are all representing Belize. Go, Belize Baby Jaguars!! Go for the Gold!!)