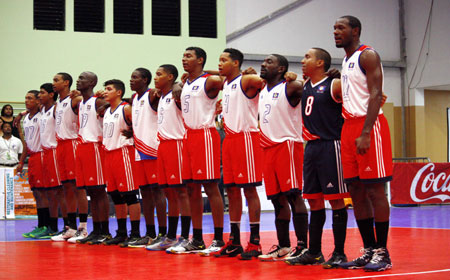 Belize ended a 16-year drought of not reaching the podium in a major event. A festive crowd packed the SCA Center to watch Belize fire-up against Honduras with an exciting victory. Belize finished the event with 4-2 win-loss record, 18 points and third place. Honduras ended with 1-5, 8 points and sixth position.

Belize had an impressive 11-4 blocking margin, stopping Honduras’ intentions in keeping the ball on their side of the court. Belize also held advantage in kills (38-30) and in serves (4-1); they scored on 23 opponent errors and committed 20 of their own.

Outside hitter Bryton Codd led Belize offensive line with 14 points, while opposite Karym Coleman and outside hitter Keith Castillo chipped in with 13 points apiece. Honduras top scorer was outside hitter Frank Alley with 10 points.

Bryton Codd, top scorer of Belize: “This game was a little bit more relaxing for us. We noticed they were trying to change our pace and get to their level; we got out of that mental lapse to come out with the win. The group really clicked to play with intensity and finish in three sets. Finishing third and in front of our people is overwhelming, fun and exciting.”

Frank Alley, top scorer of Honduras: “This is sport; sometimes you win and sometimes you lose. In our case, this is a transition team with a combination of young and older players. This is a good experience; we have to work real hard. We are representing our country, and it was an honor.”

(Ed. Note: Congrats to our National Volleyball Team players and coaching staff, as well as the Belize Volleyball Association on an important milestone. On the way to the Bronze medal, Belize defeated El Salvador, Panama, Nicaragua and Honduras; and lost to eventual champions, Guatemala and sub-champs, Dominican Republic.)