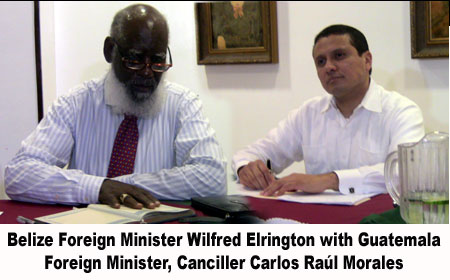 BELIZE CITY, Mon. July 27, 2015–The Ministry of Foreign Affairs called a press briefing at the Radisson Fort George Hotel this morning, as a preview to Tuesday night’s forum dubbed, “Belize/Guatemala Relations: A Culture of Peace.”

The forum, during what the Organization of American States (OAS) interestingly dubs “Belize-Guatemala week,” comes only weeks after armed Guatemala Naval officers ordered a contingent of Belize Coast Guard officers off Sarstoon Island – squarely inside Belizean territory, and against the backdrop of resistance from Guatemala to Belize’s long deferred decision to build a forward operating base (FOB) in the Sarstoon area.

That base, which should have been built more than seven years ago, is deemed necessary for national security purposes, and specifically to fight illegal fishing, drug and human trafficking, and illegal logging perpetrated by persons believed to be Guatemalan and Honduran nationals – a situation that has reportedly worsened because of relaxed surveillance in the area.

Belizean officials had said that Guatemala had insisted that no FOB should be established in the area, and that the status quo should remain until the territorial differendum is decided by the International Court of Justice (ICJ).

Additionally, the matter was to be discussed at the OAS later this month.

However, Guatemala has evidently stepped back from its hardline stance on the matter—but that is against the backdrop of Belize’s concession to enter into a new joint regime for policing the area.

Today, Canciller Carlos Raúl Morales, Guatemala’s Foreign Minister, told the media that Guatemala’s objection to the construction of the new FOB was based on agreements between the two countries dating back to 2000, under a regime of confidence-building measures, under which he claimed the parties had agreed not to erect new military outposts in the border areas.

However, we checked those documents, dated 2003 and 2005, both signed by former Foreign Minister Assad Shoman, and we found absolutely nothing in those agreements to support Morales’ claims.

To further probe into the matter, we spoke with Senator Lisa Shoman, ex-Foreign Minister in 2007 and 2008 who has been intimately involved in the Belize-Guatemala process, and she categorically told us that there was no such agreement.

Resistance to Belize’s security presence on the border is not a new tactic by Guatemala. In fact, the Amandala had reported back in March 2010 that Belize’s attempt to construct an observation post at Machaquilha in western Belize, on the Belize side of the border, to stave off similar illegal incursions by Guatemalans, was met with fierce resistance from officials in Guatemala, after protests from their nationals.

They accused Belize of “militarizing” the border.

Guatemala furthermore alleged that the conservation post was a political strategy to demarcate the border long ahead of the resolution of the case by the International Court of Justice (ICJ), according to Belize’s then Ambassador to Guatemala, the late H.E. Alfredo Martinez.

This time around, the objection by the Guatemalans has been to Belize’s move to establish a forward operating base in the Sarstoon area – an area over which Belize never ceded jurisdiction.

Senator Shoman tells us, though, that the decision to build the FOB was actually made under the administration of the Opposition People’s United Party and they had, in fact, chosen the Sarstoon Island – the said location where the Guatemalan Navy approached the Belize Coast Guard and ordered them to leave.

According to Shoman, the decision to build the base on Sarstoon Island had been communicated back then to their Guatemalan counterparts, and she went further to say that building materials had once been moved to the island to start the construction of the base. She cited funding constraints as the reason why the base was not built.

Today, after Canciller Morales and Belize’s current Foreign Affairs Minister, Wilfred “Sedi” Elrington, had their morning meeting, ahead of the press briefing, the two reportedly reached an accord.

Morales indicated that their objection was based on their understanding that Belize wanted to build a military outpost, but after having heard from Elrington, he now understands that it is a Coast Guard base – to which they do not object.

While Elrington declared that, “We will move forward and we will build the base… as soon as it is convenient to us,” he did not specifically say how soon it would be erected.

Secondly, though, a new dimension is being added to the way law enforcement operations are carried out in the south of Belize.

The Amatique Bay is a vast area in the south of Belize, which also encompasses the coastline of Honduras and the Gulf of Honduras, where Belize had originally intended to focus its law enforcement efforts.

Previously, Belize and Guatemala have not engaged in a joint law enforcement regime for Belize’s southern waters.

The 2003 and 2005 confidence building measures set out procedures only for joint military operations along Belize’s western border with Guatemala.

After today’s press conference, Morales and Elrington rushed over to a lunch meeting with the 20 countries which constitute the Group of Friends, who will be asked to give their financial support to another OAS border office at Santa Cruz and Jalacte in the Toledo District.