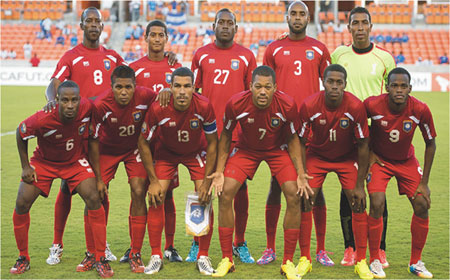 BELIZE CITY–Belizean fans who knew better, and were aware of the huge handicap in training and preparation that the Belize National “A” Team faced going into the Central American Cup 2014, could not realistically set their hopes too high. Winning the tournament was definitely out of the question. Qualifying for the final day of games on September 13 would mean upsetting the plans of either Honduras, El Salvador or Guatemala, all much higher ranked and better prepared for the tournament than Belize – a big task, indeed.

But hope springs eternal, and the Belize Jaguars have repeatedly proven that one thing we don’t lack is heart.

Thankfully, our performance, though not stellar, showed that “we belong;” we were not humiliated, despite some own goals, and our opponents had to work hard to achieve their victories. Belize exited the tournament after the group stage, but our players could hold their heads high, despite the failure of the FFB to allow them adequate preparation. Numbers don’t lie; we gave up 2 goals in each of 3 games, and the better team won. (Belize lost 2-0 to Honduras, 2-1 to Guatemala, and 2-0 to El Salvador.)

Of course, Costa Rica went on to defeat Guatemala, 2-1, in the championship game; Panama defeated El Salvador, 1-0, for third place; and Honduras secured the fifth spot with a 1-0 win over Nicaragua.

Below are the standings at the end of the group stage, followed by the concacaf.com report on the Belize vs El Salvador game.