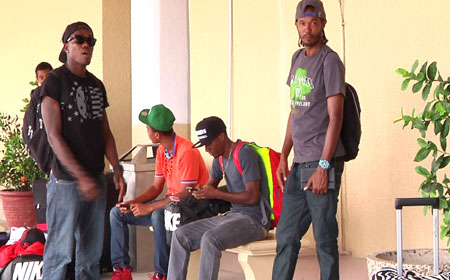 LADYVILLE–After playing three valiant, but unsuccessful matches at this year’s UNCAF Nations Cup tournament, which is being held this month in the United States, the Men’s National “A” Football Selection, known as the Belize Jaguars, returned home today after falling out of the competition with three losses.

This year’s outing, unlike last year’s, could be considered disheartening, and LeRoy Sherrier-Lewis, the coach for the Jaguars, gave us his thoughts on how the team performed in the tournament and what were the challenges they encountered.

He said, “As a coach, I think we did a good job. We played heart and soul, but we couldn’t play better than that with 2 weeks of training. I just hope that in the future, the FFB and those in charge of football start to take this thing serious because we see that we can go out there and compete; but if we can’t compete at the same level, we will have problems all the time. Last year, we had three months of training. I just came in this year as a matter of emergency. I’m a coach, not a miracle worker, so I just want to be clear with the people. I’m just saying that if the team does not prepare like other teams prepare, then it’s impossible; we’ll never make it.”

Sherrier-Lewis said that the main issue was organization of the team, but the players, 6 of whom were new to the national team, “went out there and did their best”.

Defender Ian Gaynair, who shared the same sentiments, was regretful that the team was not able to finish the tournament, and he told us how he felt about it.

He said, “I think we played 45% out of 100%, and I think it has to do with the organization of the team, especially in the defense. If your team is not well-prepared for those competitions, then this will be the result. I just hope that next time, we will be more prepared. I still won’t hold my head down because I know that all of us went out there and tried and did our best, although we only trained for two weeks.”

Team Belize lost two to nil in our first game against Honduras in Washington, DC, but the defeat was doubly disappointing because both of Honduras’ goals came from auto goals.

Dalton Eiley, also a defender, scored an auto goal in the 2013 Gold Cup tournament outing, and he spoke about overcoming from an auto goal, and why he thought the team fared how they did.

“It’s hard. You just have to rise above it, put it behind you and move on, remembering you have more games to play, because the tournament isn’t over. Belize has talent, but if we can’t merge that talent properly, then we won’t have a fighting force to go out there and play against these guys who play year in year out.”

Of the games played against Honduras, Guatemala and El Salvador, respectively, the Jaguars earned only one goal, which was scored by striker Deon McCaulay in the game against Guatemala last Wednesday.