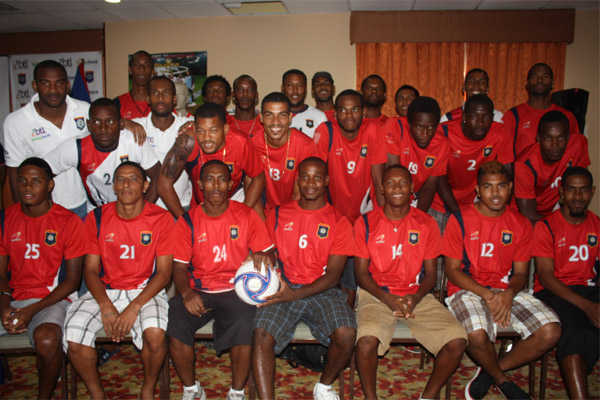 Our Belize National “A” Team, the Jaguars, returned to Belize this morning to a warm but modest reception from fans and family members at the Philip Goldson International Airport, after losing their third Group Stage game yesterday at the CONCACAF Gold Cup 2013 in the USA. It was Belize’s first time participating in the prestigious Gold Cup, which features the 12 best national teams in the North Central American and Caribbean Football Association, the regional football body known by its acronym, CONCACAF.

There were many hurdles facing the team before even boarding the flight out of Belize on Friday, July 5, and the sheer demands of their travelling and playing schedule, the much higher level of opponents than they are accustomed to, the strain of the high altitude encounter in game 2 against Costa Rica, along with their eagerness to accommodate the throngs of excited Belizean fans in the U.S., all took their toll on the Jaguars, who appeared lethargic in game 3 yesterday against Cuba, falling 4-0, the last goal coming in injury time. It was a devastating loss, but one from which the team must learn many lessons for the future about playing at this level of competition.

Gold Cup 2013 is history for the Belize Jaguars, who will now have the luxury of looking at the rest of the competition at home on T.V., and start planning in earnest to qualify for the next Gold Cup in 2015.

Coach Ian Mork did not return with the squad; reportedly, he has other commitments in the U.S., his home country. Like his predecessor, Leroy Sherrier Lewis of Costa Rica, though under quite different circumstances, Mork will not be available for a post tournament chat with the local media for some time. And there will be some hard questions. His contract, according to FFB executive member Marlon Kuylen, who accompanied the team on the trip, ends with the Gold Cup, and is up for re-negotiation.

The triumph and the glory of our Belizean Jaguars is that we played all games and gave our all; and none was a “walk in the park.” Even the mighty USA got their net shaken, were gifted an unearned penalty, and had to play their best ball to earn that 6-1 victory. Without altitude training, the Costa Rica game, at 4,400 feet above sea level, left our legs weak for the Cuba game; and it showed. Nevertheless, our boys battled on, forcing their Cuban opponents to pull out a heroic effort, after we were one man down, to gain their needed 4th goal deep into injury time.

The triumph and the glory of our Belizean Jaguars was also in the fact that we spent the full 10 days in the big cities of the USA, and all our team members returned, leaving behind no scandal for any wrong doing. In fact, our three players who rejected the attempts from match-fixers are still being hailed as heroes of Gold Cup 2013.

And we shall long relish that special goal, that Ian “Yellow” Gaynair converted from captain Elroy Smith’s free kick, to tighten the net of the great USA.

We are all back home together in one piece; praise the Lord.

It was a great investment in nation building, in touching base with Belizeans in the diaspora, in introducing Belize to many millions across the world, and in sparking the dreams of many Belizean youth, our future.

There are many lessons to be learned from this experience; and the work of review and analysis must begin before memories begin to fade, so that our planning going forward can be more effective and fruitful.

“Fus bruk” is always rough. We are proud of all you young men who gave your all; who rejected the “pieces of silver” to sell our your homeland; who pushed on with weary legs when no more changes were available; who rebounded from a calamitous error and battled bravely the rest of the way; Belize salutes you all – the Jaguars of Gold Cup 2013. Despite the losses, you made Belize proud to be there and to conduct ourselves on and off the field with dignity and courage.

The Jaguar sleeps tonight. But we will be back. Go, Belize!! Belize forever!!!