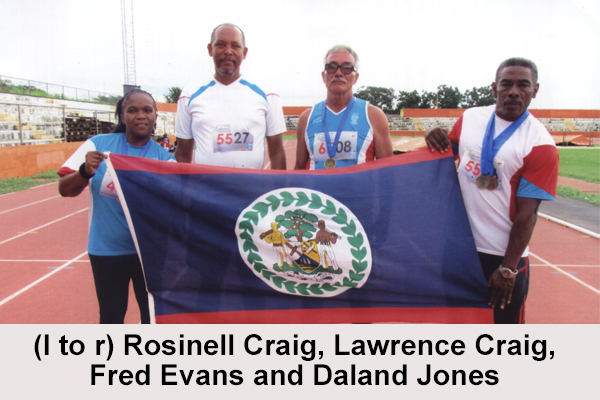 A small delegation made up of one female (F) and three male (M) Masters athletes left the Jewel in the middle of last week to compete in the 18th annual Central American Masters Track and Field Championship held in Managua, Nicaragua, from November 7 – 9. According to Daland Jones, a member of the Belize delegation, the meet involved some 450 Masters athletes from the seven Central American countries, which were each allowed no more than two participants in each Track or Field event. The small Belize delegation only participated in the Field events, and returned on Sunday with a remarkable take of 5 Gold, 2 Silver and 4 Bronze medals, after having competed in 13 individual events. Most outstanding was veteran athlete (over 60 years old) and former President of the Belize Amateur Athletic Association, Fred Evans, who captured an amazing 3 Gold and 1 Silver medals.

Individual performances were as follows: