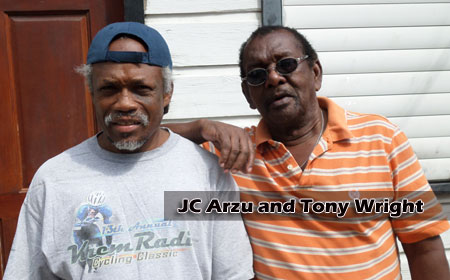 The show is produced to promote Belizean artists nationally and internationally, and provides a medium for artists to tell their story, and get media exposure.

The show was first aired on February 9, 1995, and is produced by Tony Wright assisted by JC Arzu, both of KREM Radio.

In an interview with Amandala, Wright said that prior to the airing of Belize Musicians Past and Present, there was no other show, or outlet, besides the Amandala, by means of which artists could go and tell their stories, and demonstrate their art.

The producer said that it all started with JC Arzu, who began to promote local artists on KREM Radio, and he is the powerhouse behind promoting and exposing the local artists.

Some of the major artists who have made appearances on the show include Wilfred Peters, Sr., Andy Palacio, Paul Nabor, Franky Rhys, and Lord Rhaburn, among many others.

Arzu said that what is being done by politicians and businessmen should be recounted, and commented on, by artists through humor and music. Art is independent of age, said Arzu, and he is calling on those in the community with the means and resources to assist the artists.

The show has received numerous prestigious awards and citations, including an award from the Consul General of Los Angeles, California, in the United States and a citation from the Mayor of Lexington City, also of the United States.

Artists who want to appear on the show can contact Tony Wright at 625-3967 for scheduling.

Wright and Arzu express gratitude to the management of KREM Radio for keeping on the show over the years, and thank listeners and supporters of the show. They say also a special thank you to Dario’s Meat Pies of Hyde’s Lane, which has supported the show over the past years and continues to do so.

Wright said that the show continues, along with giveaways. He is looking forward to seeing more Belizean artists on the show.