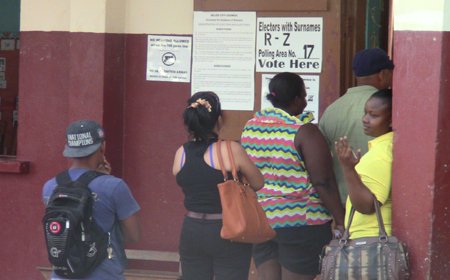 BELIZE CITY, Thurs. June 30, 2016–The Government of Belize has softened its stance on a demand which Guatemala made three years ago, in March 2013, for Belize to change its referendum legislation to remove the 60% minimum voter participation required for the referendum on whether the border controversy between the two countries should be adjudicated at the International Court of Justice (ICJ).

Speaking to the press on Wednesday, Barrow said that Belize’s Foreign Minister, Wilfred “Sedi” Elrington, had indicated that the international community and in particular the Group of Friends which has been funding the office of the Organization of American States (OAS) at Belize’s western border with Guatemala “is getting impatient,” as they feel not enough progress is being made toward the ICJ referendum.

Barrow said that it is not Belize’s fault, adding that “We are ready to go just about whenever”—suggesting that Belize could very well go to the polls before Guatemala does.

Barrow agrees to amend Belize’s referendum law, if accord with Guats can be reached on the Sarstoon

“They [the Group of Friends] do point to the fact of the high, abnormal threshold. A vote on that basis would not be a fair vote in terms of internationally accepted standards,” Barrow said, adding that Belize—which resisted the demand to change the law three years ago when pressed by Guatemala—is now prepared to change its law.

Under the special agreement (or compromis) signed by officials from Belize and Guatemala back in December 2008, the electorates of both countries would be consulted via simultaneous national referenda before Guatemala proceeds with filing “any and all claims” against Belize at the ICJ.

Molina made two proposals: (1) that Belize should change its referendum law to remove the threshold in order for the vote to proceed simultaneously on the scheduled date, or (2), if Belize refuses to change its law, then Belize should go ahead and have its referendum first; and if the result is a “yes” then Guatemala, whose bill was estimated at a cool US$30 million, would proceed with its vote by June 2014.

However, the second proposal was outside the scope of the special agreement. It so happened that last year, Belize agreed to a change in the agreement to allow the parties to hold their referenda on separate dates. Guatemala had suggested that it wanted to hold its vote along with its presidential elections last year—but its Congress has yet to approve the amendment to the ICJ special agreement, and so they had no power to proceed with a unilateral vote.

Since that change has taken effect, Belize has also agreed that it should change its referendum legislation, in line with the demands made by Guatemala’s former president in 2013.
Some Belizeans have expressed concerns that voters have not been consulted on the proposed change to Belize’s referendum legislation.

Whereas the Government has agreed in principle to change the law, Prime Minister Dean Barrow told journalists Wednesday that, “There is no way we can make such a change while the matter of the Sarstoon is still outstanding.”

To date, the parties have not agreed on a formal mechanism to resolve tensions at the Sarstoon River, Belize’s southern boundary with Guatemala, where Guatemalans have until recently been blocking access of both Belizean civilians and military.

“We cannot be satisfied until we get that so-called Sarstoon Cooperation Mechanism in writing and I believe that efforts to do just that are fully underway,” said Barrow.

He said that ambassadors for Belize and Guatemala are reducing what has been discussed in Washington last Tuesday, June 21, to writing with a view to producing this protocol.

“My expectation as a consequence of that meeting was that our people would be able to traffic the Sarstoon unimpeded. Now the Guatemalans have not formally said this and therefore I have to be careful not to attribute anything to them that is not an official position, but the proof of the pudding is in the eating and as far as I know since that meeting people have gone… without let or hindrance so I have to consider that progress,” Barrow told the press.

Barrow also said that for a while now there has been no hindrance of Belize’s soldiers on what Belize considers to be its side of the Sarstoon.

“We cannot rest content until we get a commitment in writing, until we get a formal protocol that’s agreed and disclosed to all the world,” he added.

Some Belizeans have been questioning whether a Sarstoon mechanism would mean that Guatemalans would have free access to the Belize side of the river, where Guatemalans are reported to fish regularly near the mouth of the river using gillnets, in contravention of Belize’s fisheries legislation.

In response to our query, Barrow said that he does not know what exactly was on the table in Washington, but he asserted that Belize owns one-half of that river as stated by the 1859 treaty, and the agreements should be in line with that official position.

“I did note that the OAS Secretary General talked about free navigation under international rules. I am not sure what the legal position is in a situation where in fact both sides would accept the 1859 demarcation… I am not sure if there would be some sort of freedom of passage by either side,” Barrow said.

As for law enforcement by Belizean security officers stationed at the Sarstoon Forward Operating Base, inaugurated earlier this year, Barrow said that policing illegal fishing or related activities are generally not part of the immediate role of the military there. He said that whatever shared responsibilities would be agreed between the police and the Coast Guard have yet to be directed by the Ministry of National Security.

So what if the OAS talks to resolve the border issues with Guatemala fail? Will the Government of Belize consider engaging another body, such as the United Nations?

Barrow told us, in reply to this question, that: “There is no doubt in my mind that the OAS is the best vehicle for us to utilize in seeking to obtain the kind of breakthrough that we wish.”