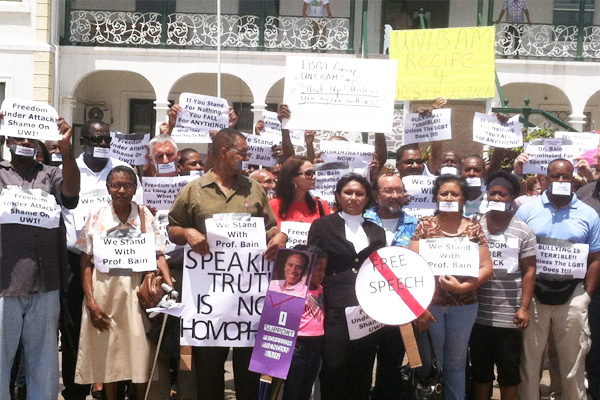 Jamaica Bar Association says, “This sort of retaliation against Bain may well be contemptuous of our system of justice as same could be considered as a wrongful interference in a judicial process.”

At the conclusion of a spirited demonstration inside the Battlefield Park in Belize City during Friday’s lunch hour, organizers asked for, and protestors agreed to give, support for an initiative to open a fund so that donations could be lodged towards legal fees for a court challenge of the recent termination of Professor Brendan Bain as head of the Caribbean HIV/AIDS Regional Training (CHART) Network at the University of the West Indies (UWI).

Pastor Scott Stirm of Belize Action, the lead organizer, told Amandala that, “…this is victimization, it’s bullying at its best and we’re seeing it happen all over the world and here it is: It’s coming to our shores.”

Pastor Eugene Crawford, president of the Evangelical Association of Belize, called the termination of Bain “very, very unjust.” Muriel Laing Arthurs, a prominent Belizean who actively promotes the legacy of Belizean icon Simon Lamb, termed it “cowardly” and said that he should be reinstated.

Stirm said that they rushed to organize Friday’s protest because they did not want the week to go by without sending a message to Professor Bain, that they stand with him; and also a message to the University of the West Indies, which terminated him on Tuesday, that, “This is terrible and deplorable, what they did, caving in to that pressure and also a loud message to the Caribbean that everybody needs to wake up.”

Valdemar Andrade, who said that he has never protested, noted that when HIV was first discovered, it was among gays and people thought only gays could get HIV. He said a referendum should be held in Belize so the community can declare its stance on the sodomy laws being challenged. Andrade said that he came out in support of Bain because he spoke truth based on research.

In his report to the court, Bain pointed to a high concentration of HIV within the male homosexual community, and he pointed to high health costs. However, the popular stance of international health agencies is that the criminalization of sodomy worsens the problem, and so the prevailing contention is that those laws should be changed. This view has been espoused by The United States President’s Emergency Plan for AIDS Relief (PEPFAR), which has provided funding for CHART.

As an expert witness in the Belize Supreme Court, Bain had provided a deposition on the case of Caleb Orozco and the United Belize Advocacy Movement (UNIBAM), in which the parties are challenging Belize’s sodomy laws. Subsequently, more than 30 organizations, including UNIBAM, wrote UWI alleging a conflict of interest and loss of confidence because of the deposition Bain gave as expert witness, which was requested by the churches, who are fighting the case as interested parties. Some, including Jamaican and Belizean legal professionals, question whether this is not tantamount to witness tampering.

The Jamaican Bar Association has said in its statement that, “This sort of retaliation against Bain may well be contemptuous of our system of justice as same could be considered as a wrongful interference in a judicial process.”

“Suppose you are building a building and you call an engineer to check it and he says, ‘This steel is not big enough.’ What will you do? Fire the engineer or change the steel?” Carlos Diaz, a former parliamentarian in Belize, said as he stood shoulder-to-shoulder with protestors in the park, right in front of the Belize Supreme Court.

Yhony Rosado said that while he has nothing, personally, against LGBT persons, he stands in support of principles, because, in his view, money was the deciding factor in Bain’s termination.

Paco Smith, who wore a T-shirt with the logo of UWI, his alma mater, said that the termination of Bain “sets a scary precedent with regards of freedom of speech, research and academia…” He said that independent, objective research is now going to be subject to whether or not it’s politically correct, which he views as a troubling state of affairs. Smith believes that UWI’s decision was triggered by threats of retraction of funding, because it is the only rationale he could see “for why they made such an outrageous decision to terminate this man.”

Stirm said that, “Caleb Orozco gave his little warning in the news the other night. He told everybody to take heed. He’s feeling empowered. They portray themselves as marginalized, needing special attention and look what they pulled off.”

In that interview with Channel 5 News in Belize after Bain’s firing, Orozco said, “What this case shows is an opportunity for all these individuals who hold such strong beliefs that I may disagree with, to take heed; that it is time for us to hold a constructive dialogue, an engagement around issues that the LGBT citizens are concerned with and more precisely, take heed…”

Stirm said that the LGBT are strategically placed in leading organizations, and are giving advice to Orozco to help them coordinate their efforts here in Belize.

“It’s David and Goliath, but we’ve read that story and we know how it ends,” he told us.

Stirm said that although they would like Bain reinstated, they think it’s a long shot, and they don’t know if he is the kind of person to even fight back with a lawsuit.

Standing on the protest line was Audrey Matura-Shepherd, former vice president of Oceana in Belize, who resigned from that position after an LGBT lobby against comments she penned in her Amandala column, which angered the LGBT community.

“A. I was the first one. Now B, Dr. Bain… C. Who will be next?” she questioned. “Will they ask the Bar Association [of Belize] to remove Mr. Courtenay because he went to court and defended, or Mr. Chebat? Or Nigel Hawke because he represented the Government [in the challenge of Maurice Tomlinson to Belize’s immigration laws]?”

Matura-Shepherd said that if this could have happened to Dr. Bain, what will they do to the ‘little fish’? She noted, however, that many in the LGBT community do not agree with what has happened, but they won’t come out because they, too, will be targeted.

“It is a case of the tail wagging the dog,” said Vernon Thompson.

Thompson attributed the low turnout to the protest to fear: “It seems that this UNIBAM crowd has a lot of power. People are afraid of losing their jobs.”

“Imagine, there are people who don’t want to come out here because they are afraid that Caleb will come with a clipboard and take a list, write down your name and investigate where you work…” the attorney said.

Matura-Shepherd said that the courts should be moved to determine whether the termination of Bain was constitutional, particularly in light of the fact that he was serving as an impartial expert witness in the court case in which the court has yet to issue a final decision.

Apart from moving to establish a fund to fight Bain’s case, Stirm said that they are also anticipating a meeting with the Prime Minister in July to review the Revised Gender Policy, which has been the subject of protests and controversy since it was unveiled in 2013.

Former Ombudsman, Paul Rodriguez, said that he has “tremendous problems” with the LGBT agenda.

“That is to take away my three guaranteed freedoms: freedom of religion, freedom of speech and freedom of conscience. I will yield those to no man! No re-colonization. They want to enslave our minds,” he said.

Rodriguez informed us that he has recommended that the churches no longer dialogue with the Government on this issue. He said that the LGBT issue should be separated from the women’s agenda – with which he has no issue.

Stirm indicated to us after the protest that the parties plan to look at both the gender policy and the church report on that policy.

“That’s going to be where the rubber meets the road. All I can say is, Belizeans, you need to wake up. We’ve been talking about this for the past two to three years. Here it is! It’s coming to our nation right now: victimization, discrimination…,” he said.

David Barnett and Cadet Henderson, Jr., executives of the Belize Grassroots Youth Empowerment Association (BGYEA), said that they attended the protest to make a stand for “equality and justice.”

“I don’t have enough words to say how much we appreciate what [Bain] has done,” Emily Wade said, sending up prayers for Bain to receive strength from the Father in standing for “integrity and truth.”