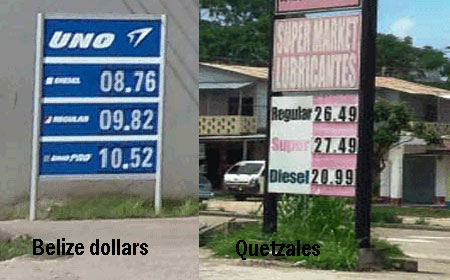 BELIZE CITY, Thurs. July 7, 2016–Although world market crude prices are down by about 20% when compared to the same time last year, government-controlled pump prices in Belize—except for kerosene—are actually higher. That’s probably because kerosene, an essential fuel for indigent families disconnected from the national power grid, was exempted from the fuel tax hikes implemented last December and this February.

Out west, where Belizeans have the option of venturing across the border to Guatemala for cheaper—albeit lower quality—fuel, the cross-border price gap is very notable.

Although premium gasoline has been priced at BZ$10.41 a gallon since June 22, a gallon of premium costs less than BZ$8 in Melchor. Of note, though, is that prices there are market-driven—not government controlled.

The concern has been expressed that the higher price of fuel in Belize means that local businesses could have a harder time competing with businesses across the border, whose fuel bill and resulting operating costs, would be substantially lower. However, the other concern is that Belizeans may be pushing more dollars out west, to the Guatemalan economy, to save on fuel costs.

We were told that the price differential up north, between Belize and Chetumal, Mexico, may be even more pronounced.

We understand that the Free Zone in Cayo, which also sells cheaper gas, is also becoming a magnet for those wishing to save on fuel costs.

Latest information from the Ministry of Finance indicates that roughly four out of every ten dollars that consumers pay at the pumps for gasoline and diesel is attributable to taxes levied by the Government of Belize.

Last July, the tax portion was about 10 percentage points less. The Government has said that it had to implement the tax increases as a fiscal consolidation measure, to make up for revenue shortfalls, such as a reduction in earnings from locally produced crude oil.