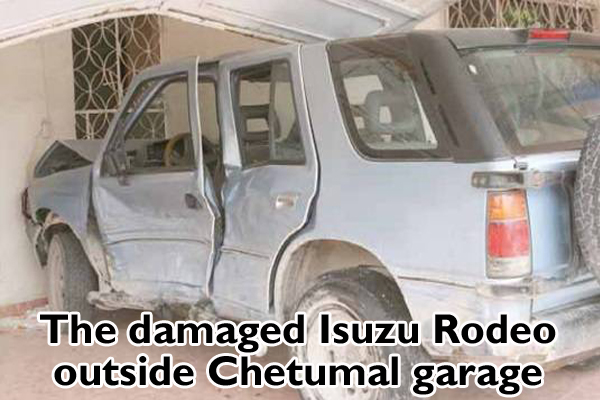 He hit 2 vehicles, damaged a garage and caused over BZ$20,000 in damage

A Belizean driver got himself into trouble in neighboring Chetumal, Mexico, after he ran a red light and slammed into a parked vehicle and damaged the side of a garage. The estimated cost of the damages he caused is over $100,000 Mexican pesos, or about $20,000 Belize.

The driver of another vehicle was also injured by the crash.

The incident occurred about 2:30 Saturday evening on the Primo Truth Street in Chetumal. Authorities have said that the Belizean driver, in an Isuzu Rodeo, was distracted and speeding when he ran the red light on Independence Street and collided with a pickup being driven by Chetumal resident Edgar Manuel Medina Flores, 32, who was driving across the street after his traffic light turned green.

According to the Mexican newspaper Por Esto Chetumal, the Belizean driver was trying to beat the light, which had changed to red, causing him to slam into the side of the pickup truck. The impact caused the Rodeo to slide across the road and hit a vehicle that was parked by a garage. The impact also damaged the side of the garage.

Edgar Flores suffered a wound on the nose, so Red Cross paramedics took him to the hospital for medical attention.

The Belizean driver has since been detained in Chetumal, pending charges.