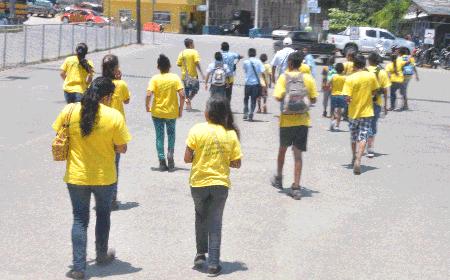 BENQUE VIEJO DEL CARMEN, Cayo District, Fri. Apr. 22, 2016–The announcement yesterday, Thursday, by the Republic of Guatemala that it will beef up its military presence at its two borders with Belize, on the south at the Sarstoon River and on the west at the so-called Adjacency Zone, has had a dramatic effect on the traffic of Belizeans going across to the Guatemalan border town of Melchor de Mencos to shop and do business today.

Guatemala made the announcement in the wake of the fatal shooting of a Guatemalan teenager who was shot and killed by Belize Defence Force soldiers after a group of Guatemalan poachers opened fire on a BDF patrol on the Belize side of the border, where the patrol had one Guatemalan in custody for being in Belize illegally.

Melchor de Mencos, the nearest Guatemalan town to Belize, has traditionally been a place which many Belizeans visit to do their shopping, as well as for medical and dental purposes, but today, the effect of the Guatemalan military buildup on the Belize borders is being felt here, as Belizeans have decided to stay at home.

On the flip side, there are many Guatemalan children attending school in Belize.

One Belize immigration officer who spoke to Amandala on condition of anonymity told us that before the midday hour, at least 200 Belizeans would have crossed the border to shop in Melchor compared to the 25 or so who had gone across since the start of the business day.

Added to the precipitous drop in the flow of Belizeans across the border, there were unconfirmed reports of a threat of arson against the border management buildings in the adjacency zone this morning.

While none of the Belize officials who work in the structures would go on the record to explain exactly what had transpired, one Belize Customs officer told Amandala, off the record, that as a result of the threats, the Guatemalan taxi drivers who are usually around the main buildings on the Belize side of the border had been asked to remove themselves and go nearer to the Guatemalan side of the border crossing.

With the little English that they could muster, the Guatemalan taxi drivers wanted to know why some Belizeans were there taking pictures of them. A few members of the Belize media had traveled to the border to see what the situation was like today.

The Guatemalan taxi drivers, none of whom spoke English, were observed sitting under a small tree getting shelter from the sweltering heat.

The large number of motorcycles that were parked on the Belize side would soon begin to dwindle, at the end of the morning session of the schools in the Benque Vejio del Carmen area, many of the parents of the Guatemalan students put their children on their motorbikes and headed back across the border. Some parents waited in vehicles for their children, while other children were shuttled in buses. At least six busloads of Guatemalan schoolchildren were driven across to Melchor after classes finished for the morning in the Benque schools.

The Belizean tour guide, who identified himself as John August, said that the Guatemalan newspaper El Diario contained a story about the shooting incident involving the Guatemalan minor, but the paper reported that incident, as happening in the Sarstoon and not in the Chiquibul area of Belize.

August said that he used to go to Cadenas, and he remarked, “No one used to follow us. We have been bowing to Guatemala too long. Both parties have been turning a blind eye to this matter too long. I have written reports when I used to work in the field that the Guatemalans come into Belize too easily from places like Jalacte and Crique Sarco, which are villages in the Toledo District.”

“With this Guatemalan president that they have now, the Guatemalan civilians are getting bolder and bolder towards our law enforcement officials,” August said.