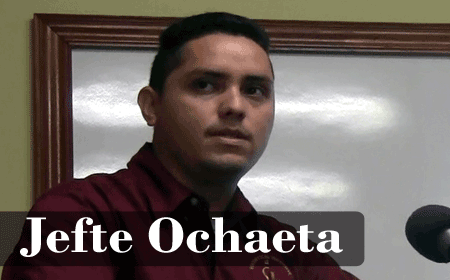 BELIZE CITY, Wed. Mar. 30, 2016–Belize’s economy continues to grow in a “zigzag” pattern, with growth plummeting from 4.1% in 2014 to 1% last year, according to the Statistical Institute of Belize (SIB). Its final figure is lower than the 1.4% figure reported in the Prime Minister’s budget speech on March 8, 2016. The production of goods and services in Belize, which is represented by the Gross Domestic Product (GDP), was estimated at $2.764 billion, a growth of about $27 million—contrasting sharply with 2014, when production of goods and services was up by $107.4 million. 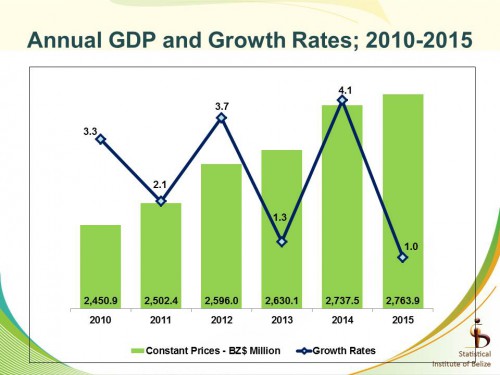 In its first press conference for 2016, the SIB reported on Belize’s foreign trade and inflation statistics, apart from the GDP data. (We will cover those other two sets of data in separate articles.)

Jefte Ochaeta, Statistician I, presented on the GDP data for the fourth quarter of 2015. Ochaeta noted that the GDP grew by 0.6% in the fourth quarter, compared with the same time in 2014, with total production at $661 million, up $4 million from the previous quarter. 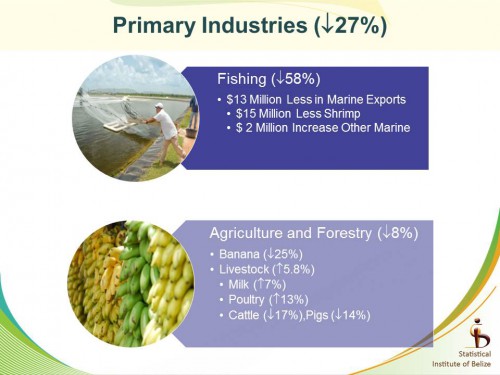 In explaining why there was such a small increase in the size of the Belizean economy in the fourth quarter of 2015, he pointed to a drastic reduction in the fishing industry as well as in major agricultural commodities.

The only other categories which had a positive impact on the economy were government spending, electricity, wholesale and retail trade, and transport and communications, he told the press.

The primary sectors of Belize’s economy—which have traditionally buttressed the economy—produced 27% less in the fourth quarter, due to a decrease by 58% in fishing, Ochaeta said. Marine exports were down a whopping $13 million. He said that the industry is recovering and a change in those numbers is expected for 2016.

Similarly, production in agriculture and forestry were down, but to a far lesser extent, with an 8% decrease. Meanwhile, banana production dropped as much as marine exports by 25%, due to drought conditions.

According to Ochaeta, this was the lowest banana production since 2011. He said that the weather affected crop maturity due to the late start of the rainy season and drier than normal conditions last year. 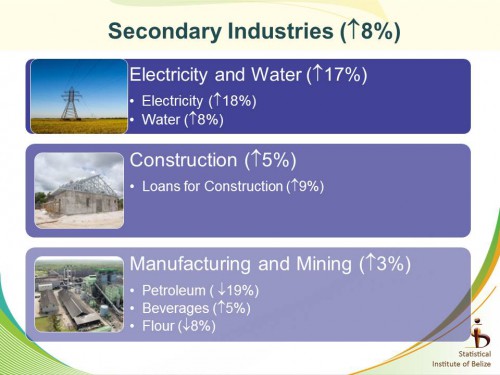 On the other hand, secondary industries increased production by 8%, driven by a 17% increase in electricity production due to high production of hydroelectricity for the national grid. According to Ochaeta, 14.7 megawatt hours more of hydroelectric power was produced; likewise, an additional 45.3 million gallons of water were distributed since more rural areas got connected to the distribution network. Construction was up 5%, with 9% increase in construction loans.

The news continued to be grim on the crude oil production front. The statistician said that a huge decrease of almost 20% in petroleum production was reported due to the natural depletion of reserves at Spanish Lookout. Production by Belize Natural Energy decreased by almost 29,000 barrels of oil.

The SIB also reported an increase of 5% in beverage production but a decrease of 8% in flour production, down by 300 metric tons or over 600,000 pounds of flour – falling for the second consecutive year in 2015.
Strong performance was reported in overnight tourism, which pushed tourism figures in the positive direction despite a drop-off in cruise tourist arrivals. In fact, Ochaeata reported

that the December arrivals were a record high with 89,000 tourists coming for overnight stays during that quarter, up from 71,000 during the previous quarter – an increase of 18,000;

whereas cruise tourist arrivals dropped during that same period by 7,000.

“The tourism industry recorded a strong performance during the fourth quarter of 2015, with accommodation and restaurant services growing by 11 percent in comparison to the fourth quarter of 2014. The number of overnight visitors rose by more than 18 thousand persons, boosted by the commencement of additional flights to Belize by two new airline carriers during the quarter,” the SIB said. 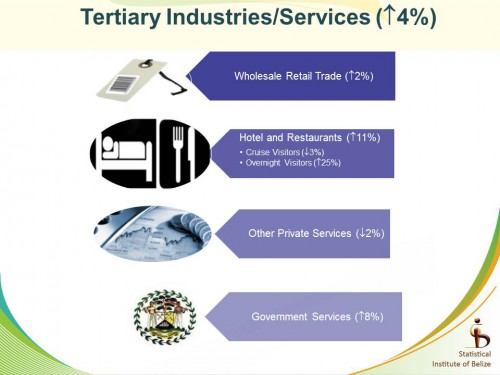 “In 2015, we started strong. The first quarter had a positive growth and then the second half of the year we had a reduction in the production. That’s where we started to feel decreases in agricultural production and [the] fishing industries, but the overall summation for the year for the economy we had a positive increase of 1%. We are expecting 2016 to have a similar pattern,” Ochaeta said.

He told us that at no time in 2015 did Belize experience what he would term as a recession.

“There were some problems in some industries, but it will get better,” Ochaeta added.

The SIB does not provide economic forecasts. However, in his budget presentation earlier this month, Prime Minister and Minister of Finance, Rt. Hon. Dean Barrow, said that, “…it is currently estimated that GDP growth will moderate to between 1.5 to 2.0 percent in 2016, as the primary sector contracts further and activity in the secondary sector flat-lines.”

According to Barrow, sugarcane deliveries are projected to rise by 23% due to Santander’s output; however, production of all other major export crops is likely to decrease.

“Banana output will be negatively impacted by the halt in the operations of the Meridian Group, and the major producer of papayas has signaled that production will be halted in August. Output of farmed shrimp will remain low as farms will only recover from disease and begin harvesting during the second half of the year,” he added.
A fall-off in agro-processing and the continued shrinkage in crude oil extraction should result in declines in the manufacturing sector, but continued growth in overnight tourism could have a positive impact in 2015, Barrow said.
He cautioned that the major downside risks on that front include lower than projected expansion in tourism if the economic recovery in source markets weakens, and the squeeze that slowdown in international payments arising from the correspondent banking difficulties may cause on domestic activities.
(All figures are in Belize dollars.)