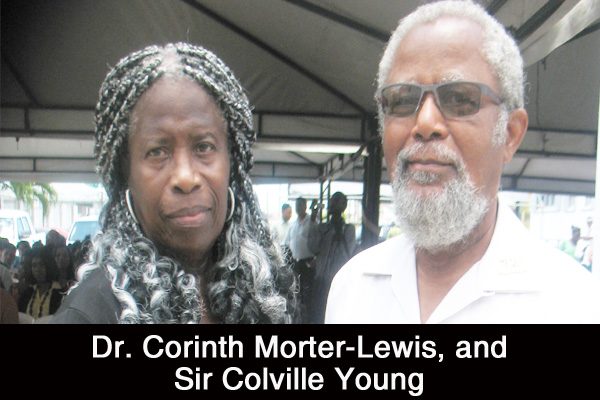 Lifetime Belizean educator, author, poet and playwright, Dr. Corinth Morter-Lewis, described by Governor-General Sir Colville Young as “a true Renaissance woman,” on Wednesday morning released some of her most treasured compositions inside two volumes of her latest publication: Moments In Time, Volume 1 and Volume 2.

The launch was hosted by the Belize National Library Service and Information System (BNLSIS) at the Leo Bradley Library on Princess Margaret Drive in Belize City.

Chair of the BNLSIS Board of Trustees, Brenda Armstrong, thanked Morter-Lewis for the hope she has given to writers who will venture into this field.

To those attending the book launch, Armstrong said: “May [Moments in Time] inspire you not only to read, but to write as well.”

In the foreword to Volume 1, Amandala publisher Evan X Hyde said: “These writings of Corinth Morter-Lewis reveal her great love for Belize and the Belizean people. This is a love which is unabashed but understated in comparison with the rhetoric of our electoral politicians…”

He added that “The writings of Corinth Morter-Lewis express her private thoughts and feelings over the last four, almost five decades, as she has gone about her business of construction of the nation. These writings provide an important insight into those Belizean decades from nation building through second guessing and soul searching to our ongoing crisis of youth.”

Brianna Johnson, Standard 6 student of Libertad Methodist School, Corozal, who endorsed Volume 2 of Moments in Time, said she had fun reading, and learned many things.

“All teachers and students across Belize should take time out to read the book and be educated and entertained,” said Johnson. “Dr. Lewis did a splendid job of giving us a Belizean flavor to poems and stories. My favorite poem is ‘My Mother’s Love,’ while my favorite play is ‘The Gift,’ because it reminded me of my own family, and it is about the Johnson family and my family is Johnson, too!”

Johnson said, “From reading the book, I can clearly see that Dr. Lewis loved her childhood days and loves Belize very much.”

Published poet and educator Ivory Kelly, before sharing Morter-Lewis’ poem ‘Tropical Oasis,’ noted that the role of the poet is to show us who we are, to hold up the proverbial mirror in front of our faces to show us the good, the bad, the beautiful and the ugly. Another role is to show us our humanity: we are soulful beings with the capacity to feel and feel deeply, Kelly added.

Jose Sanchez described Moments in Time as “a tour de force of life.”

“Feel free to paddle in your leisure on the river of Moments in Time, Volume 1,” Sanchez urged.

On that journey, Sanchez found “nationalism,” “history from the time of our ancestors,” and “truth.”

“I couldn’t help but notice ‘Heritage,’” he said, identifying it as a piece which reflects a truth that someone would forget about our nation’s past.

Indeed for Corinth Morter-Lewis, her production is truth: “I wrote it, yes, and it reflects something about me, but what I write, I feel is truth and so when you read any piece, I ask that you look for that in what you read.”

Education Minister Patrick Faber, in his remarks at the launch, said he is happy the launch of Moments of Time has fallen within the showcase of Education 2013.

Faber remembers from his childhood days one of Morter-Lewis’ masterpieces: ‘Tribute to the Belizean Flag’—a piece which he said is very much alive in primary schools today.

He thought at the time he first learned of the poem that the author must be a very patriotic Belizean; having read both volumes of Moments in Time, said the minister, he is even more convinced she is.

Faber said that Volume 2 of the book, which is for children, is a good gift to children who have no knowledge of what Belize used to be like.

“She has given us as adults a wonderful gift [in Volume 1] because sometimes we forget where we once were,” he added.

He said that he has had multiple visits from the author, who first went to see him about a selfless gift that she wishes to share with the Methodist management of schools: land adjacent to Ebenezer Methodist School on Barrack Road, and then secondly to inform him that the proceeds of the book would be going to the children through RESTORE Belize—RESTORE being the acronym for Re-Establish Security Through Outreach Rehabilitation and Education.

Morter-Lewis will also be sharing copies of her books with libraries, the National Archives and school libraries across the country.

“It is indeed a very good mark of a Belizean patriot who then decides to dedicate all that she is doing to children, especially to education, and to Belize’s development,” said Faber.

Governor-General Sir Colville Young, in introducing the author, recalled when he first met the author:

“One day a new student appeared, not from St. Hilda’s, not from St. Michael’s, not from Wesley. She timidly told me she was from Belize Technical College and to me that was amazing, because the background of a person from Belize Technical College was science and here she was in my English class wanting to learn about Shakespeare and Keats and Blake and Austin and Dickens and all the things we had to study in English Literature at that time. I had my doubts, but she had none. So we decided she would take her seat in my class and she turned out to be one of the most brilliant of my students.”

Sir Colville Young remembers more: “She was a true Renaissance woman, with her feet planted firmly in the sciences and also in the humanities. If I’m not mistaken, her doctorate is in psychology… Once again you see what a broad area of knowledge she covers.”

He said that Morter-Lewis’ writings cover more than any other writer he knows in Belize.

Dr. Lewis, in her remarks, expressed her appreciation to all the well-wishers at the launch: “Today, I would like to say thank you…. This is more than a fitting tribute!”

She added: “I appreciate you and I really want you to read this book because it’s about you… It’s my journey with you, with my country and with my people that has brought me to this place and I thank you for it. Without you, I wouldn’t be who I am.”

She said that Moments in Time is “my small way of, at this point in my life, giving back.”

Marie Muñoz, representative of RESTORE Belize, said they are very touched by the offer made by Dr. Lewis to donate the proceeds of her books, which Muñoz described as “a beautiful gift.”

“To have a private citizen calling our office and saying they would like to donate the proceeds of their book to one of our programs, we were especially inspired,” said Muñoz.

She informed that, “We would like to take the funds and establish it as part of The Adopt a Student Program.”

Muñoz explained that high school students will receive support such as uniforms, black shoes for school, and books.

Moments in Time, Volume 1 and 2, are available through the National Library Service for $35.