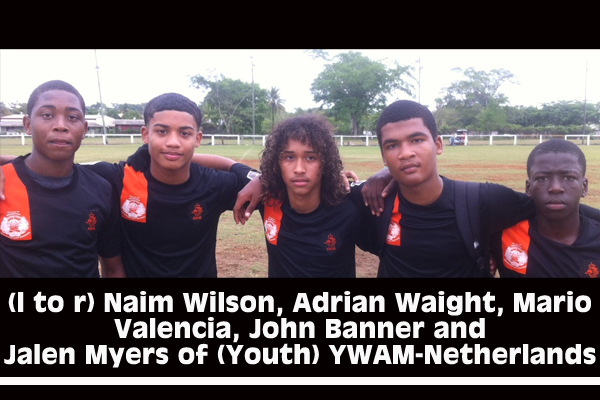 The Belmopan Football Association’s (BFA) Belmopan City Council Mundialito Kids, Female & Youth Cup 2014 completed its semifinal games over the past weekend, and this coming weekend will see the third place and championship games in all three categories.

Two Youth semifinal games were played on Saturday, May 17. (Youth) YWAM-Netherlands bombed Las Flores-Spain, 6-2, with goals from Naim Wilson (6’), Adrian Waight (7’ & 16’), Mario Valencia (9’), John Banner (35’) and Jalen Myers (70’); while Las Flores-Spain goals were by Jairo Lopez (61’) and Jaime Crespo (80’). YWAM-Netherlands advance to the Youth Finals over Las Flores-Spain with an aggregate score of 10-2, as YWAM had won their first game, 4-0. The other game on Saturday saw (Youth) Central Site-England and Salvapan-Brazil playing to a 0-0 draw. Salvapan-Brazil had won their previous encounter, 2-1, so Salvapan-Brazil advance to the Youth Finals over Central Site-England with an aggregate score of 2-1.

Two Kids and one Female semifinal were played on Sunday, May 18. (Kids) Mountain View-Italy and YWAM-Venezuela played to a 1-1 draw. Brent Dubon (12’) shook the net for Mountain View, while Shane Clother (32’) equalized for YWAM. Their previous meeting was also a 1-1 draw, so they went to the penalty shootout, where YWAM-Venezuela prevailed 3-2. Jose Garcia, Nelson Nunez and Kevaughn Theus converted their penalties for YWAM, while only Tahj Reid and Jamal Brooks scored theirs for Mountain View. YWAM-Venezuela therefore advances to the Kids Finals over Mountain View-Italy with an aggregate score of 5-4. Next was (Female) Bmp Compre High-Croatia, 5-0, over Las Flores-Spain, with goals from Ana Arias (2’, 19’, 30 & 33’) and Viviannie Pivaral (6’). (Female) Bmp Compre High-Croatia goes on to the Finals to meet San Martin-Mexico. The last semifinal saw (Kids) Central Site-England getting a 1-0 victory over Piccini-France on a goal by Jovaunn Ramos (60’). Their previous meeting was a 0-0 draw, so Central Site-England advances to the Finals over Piccini-France.

This weekend’s Finals will be decided by 1-game knockout. Third place games will be played on Saturday, and the championship matches on Sunday. All games are at the Isidoro Beaton Stadium.

Following the games will be the presentation of awards for 1st, 2nd and 3rd place, MVP, Most Goals, and Best Goalkeeper for all categories. Awards will be issued by the Mayor of Belmopan, Mr. Simeon Lopez, and Mr. Reginald Jex.