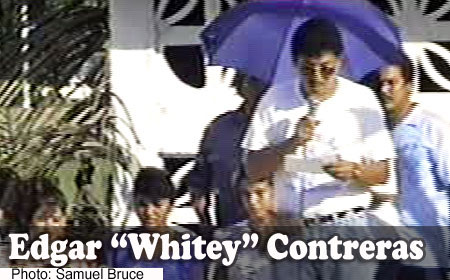 BENQUE VIEJO DEL CARMEN, Cayo District, Mon. July 13, 2015–A well-known Belizean businessman of Benque Viejo del Carmen, Edgar “Whitey” Contreras, who served as mayor in Benque in the 1990s, and who operates as a money changer in both Belize and Guatemala and is owner of the UNO service station in Benque, was detained on Saturday, July 11, when Guatemala police reportedly caught him with a gun registered for use in Belize but not in that jurisdiction.

Contreras, who we are told is the cousin of Cayo West area representative Hon. Erwin R. Contreras, Minister of Trade, Investment Promotion, Private Sector Development and Consumer Protection, has been a money changer for about two decades.

Ambassador Said Guerra, in charge of consular matters in the Ministry of Foreign Affairs, lives in Benque, and was able to immediately travel to Melchor to check into the Contreras matter. Guerra told Amandala that on Saturday, he spoke personally with Contreras, who claimed that he forgot that he had his firearm on him when he went to Melchor.

Guerra disclosed to us that he had received information that Contreras was detained near a park in Melchor at about 5:30 p.m., and he immediately informed the Chief Executive Officer in the Ministry of Foreign Affairs, Lawrence Sylvester, who instructed him to go across to Melchor and provide assistance to the former Benque mayor.

According to Guerra, Contreras did not complain of any ill treatment by Guatemalan authorities, who arrested him near the park and took him to the police station for booking.

The official informed us that since Contreras’ family had gotten a private attorney for him in Guatemala, the matter is now is the hands of the attorney.

It is expected that Contreras will be fined in court tomorrow and then released for return to Belize.

Amandala has confirmed the matter separately with Benque police, who said that they had gotten in touch with their counterparts in Guatemala, Policia Nacional Civil (PNC), after hearing of Contreras’ detention on Saturday.

A well-informed source in Benque, who has made contact with counterparts in Guatemala, told our newspaper that Contreras is due to be formally charged in San Benito Peten by the Ministrio Publico (the equivalent of our DPP), on Tuesday and he will be arraigned before a magistrate at the Juez De Primera Instancia.

Guerra said that Contreras, who had fallen victim to robbers in the past, usually carries a licensed gun due to the nature of his occupation, and the dangers which accompany it.

We are informed that Guatemala police were searching for a man that had pulled a pistol inside a bar in the market area, and they were doing random searches on people in the area when they allegedly found the gun in Contreras’ possession.