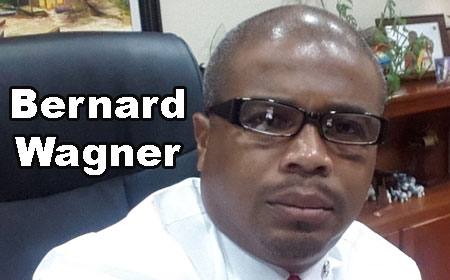 BELIZE CITY–After 23 years with the Belize Bank, Bernard Wagner, Retail Manager at the Market Square branch in Belize City, is moving on into international banking.

Wagner is one of the few locals to make it up the ladder in the banking sector, but he tendered his resignation on Friday, August 29, with effect on October 29. We understand, though, that the bank fast-tracked his departure effective Friday, September 5, which, we are told, is a customary practice when senior personnel opt to leave.

Belize Bank is the country’s largest bank, and we asked Wagner why he has opted to resign. He would only say that he has been seeking greater career opportunities and has decided the time is right.

Wagner is a former manager of the Belize Bank’s Dangriga branch and briefly held over the managerial post at Belize Bank San Ignacio branch. He is well known in the community and literally has been the local face of Belize Bank for a number of years, spearheading grass roots programs such as the Belize Bank Bull Dogs basketball club, whose core of players went on to become key members of several national teams that represented Belize regionally and internationally.

“Everything that you aspire to be, you have to go for it. You should not limit yourself. You should never limit yourself to the perception of what people think of you… You try to fine tune your skills, get whatever tools necessary to achieve your personal goals and objectives,” reflected Wagner.  “I have tried to serve the less fortunate customers as well as high end customers in a very professional manner… and have always tried to meet the financial needs of clients at all times,” Wagner said.

Wagner said that he was “born and bred in Pen Road” as the child of a single parent.

“My late mother taught me from an early age the lessons of humility and perseverance, lessons that I have carried with me throughout my professional career; she was the most proud person when she heard that I was being employed at Belize Bank… back then known as the Action bank.”

“I find comfort in the fact that in Belize, there are always opportunities for a young individual,” he said, reflecting on the opportunity he received as a young man, starting out with the bank. “I want to publicly thank the organization, for giving me that first opportunity and for giving me the space to grow.”

Wagner starts his new job in the international banking sector on September 15.