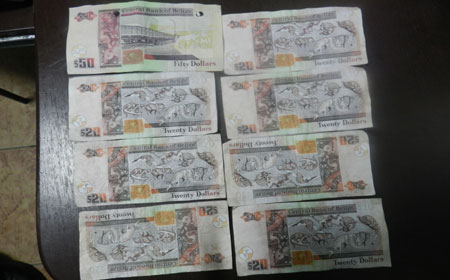 BELIZE CITY, Mon. Feb. 9, 2015–Police warn the public to be on the lookout for counterfeit Belize currency notes that are being circulated in Belize City.

Also at about 1:00 p.m. today, police went to the Belize Bank on Albert Street, where a teller handed over a $50 note with serial number DJ792434. All notes have been confirmed to be counterfeit.

Police reported that at about 11:00 Friday morning, they went to the Michael Finnegan Market located on West Collet Canal, where fruit vendors handed over the seven counterfeit $20 notes.

Police advise business owners and vendors to be on the lookout for counterfeit currency and to notify the police immediately when they find such currency.