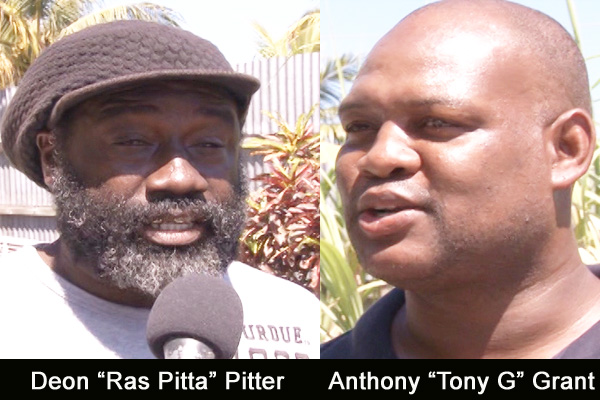 Community members and reggae lovers in particular are being invited out to Bird’s Isle this Sunday, March 9, to support a worthy cause, while enjoying a variety of reggae music from 4:00 p.m. until midnight.

The event, dubbed “Blazin’ Reggae Sunday”, will feature a host of local deejays who will be providing the audience with a mixture of both old and new reggae songs, and the subsequent proceeds will be used to assist in the administration of some much-needed feeding programs which are conducted to help disadvantaged schoolchildren in Belize City.

Today, Amandala spoke with two of the organizers, Anthony “Tony G” Grant and Deon “Ras Pitta” Pitter, who told us about the show and about their intent to make it a monthly event.

“We are putting together a show called Blazin’ Reggae Sunday and it’s a kickback from my show on KREM called ‘Blazin’ Reggae Vibes’ which is aired from Monday through Thursday from 5:00 a.m. until 6:30 a.m.”, Grant said.

He added, “We are doing the show to lend a hand to the different feeding programs such as Dara’s, Ebenezer’s, Timmy Stamp’s, and Mutty’s. As time goes on, we hope to reach out to more people.”

Tony G said that he, along with other popular selectors such as the Mad Rocka, Ras Buck, Mistah Geeh, System One, Lindy D, Ras Cas Sounds, DJ Blacks and Stone Jam will be playing strictly reggae music of all genres for a complete 8 hours – from late afternoon straight up until midnight.

Well-known activist, Ras Pitta, said that the idea came about after discussions between himself and Grant regarding the fact that many of the feeding programs in the city are normally faced with overwhelming financial burdens. “We can’t give much, but we just want to help to sustain some of Belize City’s feeding programs so that they can continue feeding the children who go to school hungry on a daily basis,” he said.

Tony G and Pitta said that they are depending on the unwavering support of the public so that they could hopefully be able to seek out other feeding programs to assist. “That’s the whole aspect of the Blazin’ Reggae Sunday show”, Pitter told us.

The entrance fee for the event will be $7.