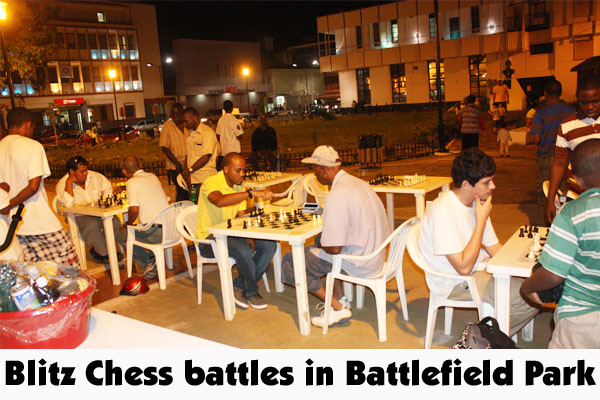 Since the inception of the Belize Chess Federation in February of 1987 by the late Ricardo Aguilar, Belize City has not experienced a Round-Robin Blitz tournament.

With the resurgence of Chess in the Jewel, many chess players had not gotten an exposure to a Blitz type tournament. So it was more than a welcome treat to the many chess aficionados of Belize City, who participated in the almost four-hour brain buster.

Looking back, before the advent of the digital chess clocks, 5 minutes per side game was the standard for Blitz or Speed Chess. Also, before the introduction of chess clocks in the mid 1950’s, chess club “rapid transit” tournaments had a referee who would every ten seconds call out the elapsed time.

Internationally, one of the first known official “Speed Chess Championship of the World” (or World Blitz Championship) took place in Kemeri Riga in Latvia, Europe, in 1937.

Blitz fever was in the air on Friday night, November 15, at the Battlefield Park. It was brutal for over 75% of the sixteen participants, who first played in such a tournament. So, to them the anguish and agony of losing some of their games on technicalities was devastating. In the early rounds, some wanted to withdraw, but with the encouragement of the Chief Tournament Director and senior players, they kept their cool and persevered to the end.

Fifteen of the sixteen players were from Belize City; the sixteenth player hailed from Dangriga. The pool of players included veteran Belize City Chess Champion Kofi Geban and Major Charlton Roches, undoubtedly two of Belize’s best chess players. The others were from various high schools and primary schools throughout Belize City, and the general public.

From the get-go, players went after each other viciously. There were noticeable upsets in every round. The most notable one was in round six, when young Akeem Roches sprang a Scholars Mate on his opponent and won the game in four seconds.

After sixteen taxing rounds, Major Charlton Roches and Captain Kenrick Martinez of the Belize Defence Force, who had thirteen (13) points each, faced each other in a Sudden Death game final to decide the Blitz Championship for the tournament. A G/3 (game in three minutes) was the deciding game. Both players played good opening moves, and after move ten, Major Roches won a pawn and forced his opponent to reconsider his strategic plans and his tactical maneuvers. It was an uphill climb for Captain Martinez, who was unable to equalize his material lost. Positionally, he tried to outflank Major Roches at move 41, but got caught in a decisive forced-play setup. Thereafter, it was mate in six. He succumbed to the onslaught. It was a brilliant finish for Major Roches, who checkmated his opponent.

At the end of it all, Major Charlton Roches was first, followed by Captain Kenrick Martinez, second, and young Dante Reneau, third. They all received monetary prizes. Young Arah March was awarded a gift basket from Grace Kennedy for being the most improved player of the tournament.

In his closing remarks, Tournament Director Glen Reneau encouraged the players to continue playing chess and to prepare themselves for the upcoming Chess Extravaganza to be held in December of 2013.

The planning committee, under the leadership of Major Charlton Roches, plans to host a monthly Blitz tournament at the Battlefield Park.