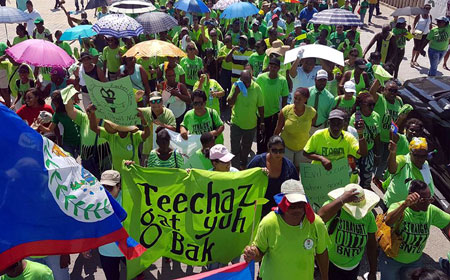 BELIZE CITY, Thurs. Oct. 6, 2016–After 96 uninterrupted hours of industrial action, intense meetings and community canvassing, the teachers of the Belize National Teachers’ Union (BNTU) today showed no signs of exhaustion or exasperation as they militantly marched throughout the streets of Belize City.

In mid-August, following the damages brought on by Hurricane Earl, Prime Minister Dean Barrow had met with the BNTU, the Public Service Union (PSU) and the Association of Public Service Senior Managers (APSSM) to discuss a deferral of promised salary increases of 3% until next April.

While the other two unions had without reluctance accepted the deferral, the BNTU had insisted that it would only accept such a deferral on the condition that the government favorably responded to its 8 demands, which it believe would have contributed to good governance.

Included in the eight demands were the appointment of the 13th Senator, the removal of Minister Godwin Hulse as Minister of Police, an international investigation into the William “Danny” Mason case, and the re-institution of the Integrity Commission and the Public Accounts Committee.

However, the government had only favorably responded to two of those demands, causing the BNTU, to lead a protest in Belmopan on September 19 and thereafter, launch the start of its industrial action on Monday, October 3.

Today, as a part of that continued industrial action, parents and students alike, as well as members of the Opposition party, pounded the pavement in solidarity with the teachers, while several hundred onlookers viewed the protest from the sidelines.

The protest started at 9 a.m. when protesters gathered inside the Constitution Park on Cemetery Road and thereafter marched to the BTL Park, where a ceremony was held up until 2 o’clock in the afternoon.

Amandala spoke with several of the participants as they took a moment to hydrate themselves upon reaching the BTL Park, where the temperature soared to around 91 degrees Fahrenheit.

Our newspaper first spoke to the senator representing the Belize Chamber of Commerce & Industry (BCCI), and the Belize Business Bureau, Markhelm Jude Lizarraga (known simply as Mark Lizarraga), who sported a neon-green shirt and carried a placard which read, “Activate the Public Accounts Committee now!”

“There are lots of issues that we [the BCCI, BBB and BNTU] share common ground, and I thought it was important for me as a citizen of this country to come out today and show the teachers my support,” he told us.

While the government and its supporters have argued that the BNTU is doing a disservice to students by depriving them of several days of critical classroom instruction, Lizarraga argued to the contrary, and in fact suggested that the witnessing of this industrial action would be more valuable to the students in their lifetimes than the traditional syllabus.

Amandala then spoke to Lizarraga’s colleague in the Senate, Senator Elena Smith, who represents the National Trade Union Congress of Belize (NTUCB) and Civil Society.

Smith told us, “As teachers, we are fighting for the betterment of this country.”

She assured our newspaper that students will not be affected by the industrial action, as efforts would be made to ensure the syllabus continues as per normal.

She also weighed in on the comments on the industrial action made on Wednesday by the Vatican’s Diplomat to Central America, Catholic Archbishop Léon Kalenga, the Apostolic Nuncio of Belize and El Salvador.

On Wednesday, prior to his scheduled meeting with Prime Minister Dean Barrow, the Apostolic Nuncio had made the call for Catholic teachers to return to their classrooms and in doing so, suspend their protest.

“He can’t come to our country and tell us that we are here to only talk and teach. What’s wrong with him? He hasn’t met with us. He has met with those who influence him to follow their views; he needs to meet with us, the teachers under the Catholic managements,” said Senator Smith.

Amandala then spoke to the National Deputy Leader of the Opposition People’s United Party (PUP), Hon. Cordel Hyde, who had abandoned his PUP colors and instead sported a neon-green T-shirt in solidarity with the BNTU.

Under the last PUP administration, the BNTU had too protested for salary adjustments and against the then perceived mismanagement of the country’s finances, he noted.

“When we were in government, I was one of those who stood up against the things I thought were going wrong,” he said.

According to Hyde, the current ruling United Democratic Party did not have to strain its relationship with the BNTU, who have agreed to accept the deferral of their 3 percent salary increase only on the condition that government complies with its 8-point demand for good governance.

“We had $325 or $350 million from PetroCaribe that was cheap money. This government has had a billion-dollar budget for each of the last eight years. They have borrowed another billion dollars from any number of sources. It didn’t have to reach this point,” explained Hyde.

Hyde accused the government of mismanaging those monies in a quest to secure a victory in their third consecutive general election.

According to him, this is not a political protest led by the BNTU, but a genuine one, or it would have occurred prior to the last election.

Furthermore, he clarified that the PUP is not trying to piggyback on the BNTU, but rather, lending it support.

The rally held inside the BTL Park by the BNTU would feature not only rhythmic performances, but fiery keynote addresses by teachers and other invited speakers.

When Education Minister Patrick Faber offered himself as a candidate for the UDP’s leadership convention in the race for Deputy Prime Minister and Party Leader, it was dynamic youth leader Shawn Saldano who introduced him.

However, today, Saldano did not hesitate to make public remarks that castigated the behavior of his former mentor.

He was joined by president of the Christians Workers Union (CWU) and attorney, Audrey Matura whose presentation, “Dey can’t bruck wi back,” accused the government of using the law to attempt to break the people.

BNTU Belize District Branch Representative, Kathleen Flowers, told our newspaper that the industrial action will be extended until Friday.

She echoed the sentiments of Senator Smith and again told us that efforts will be made to ensure that students are not placed at a disadvantage because of the industrial action.

However, she revealed that while no official reports have been made, teachers who protested did so at a loss of an average of $38 to over $210 per day.

“The BNTU and the members who make up BNTU are not irresponsible people,” she exclaimed.

Though Cabinet had released a public statement on Tuesday asking the BNTU to return to the table for negotiations, Flowers told us that they will not respond.

According to her, the BNTU will await a formal invitation from the Prime Minister for negotiations because the statement released, “was a public service announcement that has a level of disrespect that we will not countenance.”

On Friday, the BNTU’s Council of Management will meet, and after consultation with its membership, will determine if it will extend or suspend its industrial action.