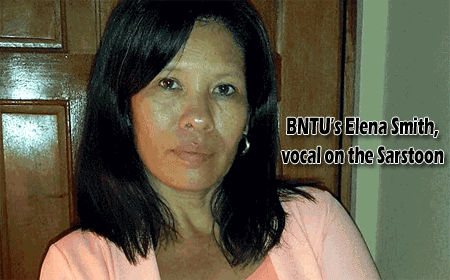 BELIZE CITY, Thurs. May. 12, 2016–    Tomorrow, the Belize National Teachers’ Union (BNTU) will be boldly marching through the streets of Belize City to protest against a recently passed Statutory Instrument that prohibits Belizeans from venturing to Belize’s Sarstoon River border, popularly dubbed the “Sarstoon Law.”

According to Elena Smith, Senator for Unions and Civil Society, who spoke with us tonight, they are anticipating a turnout of 2,000 teachers who will convene at 9:00 a.m. at Constitution Park on Cemetery Road and then march over to the BTL Park.

The Opposition People’s United Party has made public its indication to march shoulder to shoulder with the BNTU tomorrow.

Smith told Amandala that while they appreciate the support of the Opposition, “We don’t want them to come out wearing any political T-shirts saying PUP or UDP or anything of that sort. We want them to be out there as Belizeans.”

Senator Smith calls on all participants to march peacefully and respectfully tomorrow. She told Amandala that if the Sarstoon Law is not rescinded, the BNTU will have to intensify its “Stand Up for Belize” campaign.