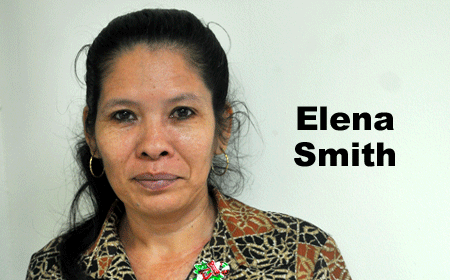 BELIZE CITY, Wed. Dec. 20, 2017–Early in the New Year, the Government of Belize and the unions will head to the negotiating table to hammer out an agreement for the over 7 million dollars that is sitting in the Public Service Workers Trust since the Supreme Court judgment that ordered it to be frozen until a new Trust Deed is drafted and agreed upon by all the parties. This situation came about after two retired public officers successfully sued the unions over the management of the funds.

Today, Amandala sat down with the president of the Belize National Teachers Union, Elena Smith, for an exclusive interview on the subject.

Smith told us that the BNTU was one of the unions which had negotiated with the government to create the Public Workers Trust Fund, after “we [public sector workers] lost increments in 1995-97. It was BNTU President at the time, Anthony Fuentes, and Dylan Reneau, who was the President of the Public Service Union, (PSU).”

Amandala asked the BNTU president what is her union’s present position regarding the shares in the fund.

“Remember, we were given the shares certificate by the government and the trust was set up to offer projects to benefit those persons affected by the wage and increment freeze. We were the ones negotiating with the government, so we were named as the settlers of the trust,” Smith replied. “So, we have to play an active role in the upcoming negotiations, because we were involved in the case. So, we are going through the mediation to see what will become of it,” she noted.

Smith added, “The claimants have made their claim. We have drafted a new trust deed and when we met with the claimants we shared with them what was in the new trust deed. As a matter of fact, I heard them saying that we did not consult with them. That is not so, because they met with us, and the draft that we had, we sent it to their attorney and it was sent to the Prime Minister, because the court ruling had indicated that the government must be a settler because it was them who gave us the money.”

“Now, in terms of the court putting a freeze on using money from the trust, and the union continuing to spend and lend out monies from it, how is that affecting the union?”, we asked.

“At our press briefing, our attorney explained that matter. He explained that there is no injunction on that matter. What the judge has ruled is that we were to provide the claimants, through their attorney, the list of loans that we had issued through the trust. The trust has its own office, and we don’t deal with those everyday administrative matters. The judge also ruled that for any future loans, we are to provide the information to council for the claimants, and if there is anything that they don’t agree with, we can always take the matter back to court for the court to make a decision,” she responded.

Amandala asked Smith how many persons are going to benefit directly from the trust when this entire legal process is completed.

“That is the question that we are unable to answer. We can determine how many teachers were in the system at the time, because you would have had to be in a classroom. With regard to public service, it is a little bit more difficult, because we have open vote workers and established workers. It has been difficult to get a list of all the persons at the time. That is the excuse that we get,” Smith said.

“But is there an estimated amount of people,” we questioned.

Smith estimated the number of persons working in the public sector at the time to be between 8,000 and 10,000. “A bulk of those would fall into the category of those who would be affected,” she said.

“So, a lot of those people have died without getting any money from the trust?” Amandala asked.

“They were not supposed to get money. And that is the misconception that a lot of people have about the trust. They feel like they could just come and we should give them monies in hand. No, it is set up so that we must do projects to benefit them. In the case that the claimants brought to court, the judge also made that point, that we are to provide projects that would benefit them,’ Smith replied.
Smith went on to explain that the trust was at the point where a project manager had already been hired.

“The same day the person was supposed to begin work, the person had to be sort of terminated, because the matter went to court,” she said.

“Are you optimistic that the mediation process will yield fruitful results?” we asked.

“I am hoping so. Some of these persons who are on the list, who are the claimants, were officers of the union. So they should be fully aware of what the negotiations were way back then and what, was the purpose. So if you were an officer of your union at the time, you knew what the process was, what the benefits were. So now that you are retired, to come now and say that you want monies, you were aware that was not the agreement. It’s not that we don’t want to give these persons any benefits, but how can we go on with any project that we have on paper when we are in court? We are hoping the mediation will yield some good results so that these persons can benefit,” Smith explained.