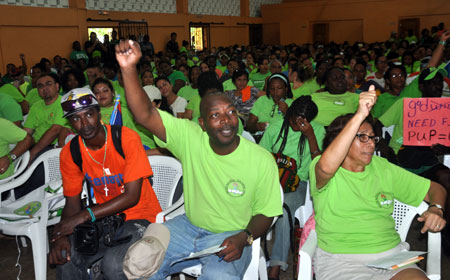 BELIZE CITY, Thurs. Oct. 27, 2016–The Belize National Teachers’ Union (BNTU) is inviting the public to a national demonstration to be held in Belize City on Saturday.

At 9:00 a.m. there will be a march through the streets of Belize City beginning in front of the Channel 5 studios on Coney Drive. The march is expected to conclude with a rally at the Memorial Park.

According to BNTU president Luke Palacio, the purpose of Saturday’s event is to firstly thank everyone who supported the BNTU in its eleven days of industrial action and furthermore, to call on the Ministry of Education to make salary contributions for the teachers who participated in the historic protest.

After the BNTU suspended its protest on Tuesday, October 18, the Ministry of Education sent a memo to school managers announcing that it would not be making salary contributions for those teachers.

The Ministry subsequently sent school managers another memo providing guidelines on how those salary deductions should be processed.

The leadership of the BNTU condemned the Ministry’s action and the Minister of Education and Deputy Prime Minister, Patrick Faber, responded by instructing BNTU president, Luke Palacio, to compensate teachers from the BNTU’s strike fund.

Palacio informed Faber that he could not do such a thing, as the purpose of the strike fund was to primarily mobilize the BNTU in times of protest, and furthermore, Faber could not tell the BNTU what to do.

The Ministry thereafter sent out another memo to school managers informing them that the withholding of salary contributions would take effect in November.

Faber then invited the BNTU executive to a meeting on Friday, October 28, to discuss the withholding of salary contributions for teachers who protested.

However, the Minister has indicated that he does not want to meet with an extended group as is customary in BNTU meetings.

Palacio, who claims that the Prime Minister Dean Barrow has had no problems meeting with an extended group of the BNTU’s council of management, has remarked, “We are not going to be blindly led into a meeting with the Minister.”

“Clearly, you don’t know who you’re dealing with when you deal with the Minister of Education and to a certain extent, some of his operatives,” he added.

Palacio reaffirmed that money from the BNTU’s strike fund exists only to mobilize the BNTU in times of protest and is too meager to compensate teachers for the eleven days of protest.

According to Palacio, the Minister of Education, “wants us to break that strike fund so that we cannot mobilize.”

The BNTU is scheduled to meet with its council of management at 9:30 a.m. on Friday to prepare its position in advance before meeting with the Minister of Education.