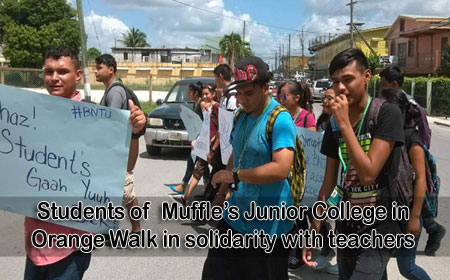 It appeared that most teachers and parents had responded to the battle call of the Belize National Teachers’ Union (BNTU,) who on Thursday had announced that they would have engaged in industrial action today, Monday, because government had not favorably responded to their 8-point agenda for improved governance.

When Amandala visited secondary schools like Sadie Vernon Technical, no teacher had arrived, while Maud Williams and Excelsior High, also on the southside, recorded only a handful of students and teachers.

Twenty-two of forty teachers, and ninety-eight of six hundred students showed up for classes at Gwen Lizarraga High School, located in the constituency of the Deputy Prime Minister and Minister of Education, Patrick Faber.

All the Roman Catholic secondary schools, such as Saint John’s College (SJC), Pallotti and Saint Catherine’s Academy (SCA), had closed their doors.

On the north side, Edward P. Yorke recorded the lowest level of participation in the BNTU’s industrial action with only four teachers and thirty-six students missing.

Nazarene High School revealed that of their 495 students, only 220 showed up, while 11 of their 26 teachers were in attendance.

When Amandala visited the University of Belize (UB) and St. John’s Junior College (SJCJC), few students were present and few classes were ongoing.

Interestingly, police officers were assigned to all of these education facilities, including even the Stella Maris primary school, a school for special needs children.

However, all primary school remained closed.

“We are told that the support is overwhelming, and it’s a manifestation that the BNTU, as a union, made sure that its members’ call is answered. The issues we continue to stand up for is for all Belizeans and our teachers, as nation builders, are just manifesting that that is who and what they are,” stated BNTU president, Luke Palacio, in an interview with Amandala sometime after 9 this morning.

At around 1:30 p.m., the BNTU would later convene a membership meeting with its Belize City branch at their headquarters near Coney Drive.

They would be joined by speakers like Audrey Matura, president of the Christian’s Workers Union (CWU), who accused the government of using legislation to defeat the people of Belize.

She further slammed the government for the mismanagement of PetroCaribe funds, the BTL saga and Education Minister Faber’s proposed Statutory Instrument to temporarily replace teachers participating in industrial action.

The President of Citizens Organized for Liberty Through Action (COLA), Giovanni Brackett, also an invited speaker, took to the rostrum to slam Pastor Rocke for introducing a motion in the Senate, apparently on behalf of the Government and against the teachers’ Senate proposal.

Also invited to speak was Opposition Senator Valerie Woods, who launched an assault on Minister of Foreign Affairs, Sedi Elrington, who she believed disrespected teachers across the country when he questioned what they knew about national issues.

Today, they concluded that of the 63 schools it canvassed in Belize City, only 8 remained open.

In Corozal Town, only 5 schools remained open, providing partial classes, while all schools in the rural communities of Corozal remained closed.

In Orange Walk, where students of the Muffles Junior College (MJC) had led a protest in support of the teachers, almost 400 teachers participated in the strike.

In Belmopan, 269 teachers participated, while of the 26 schools in San Ignacio, 20 were fully closed.

In Benque Viejo Del Carmen, most primary schools were closed, and the attendance at secondary schools was very poor.

Four hundred and fifty Stann Creek teachers were out of classes, while in Punta Gorda, four schools were fully closed and five schools remained open, with little or no students present as the majority of schools in Toledo rural remained shut.