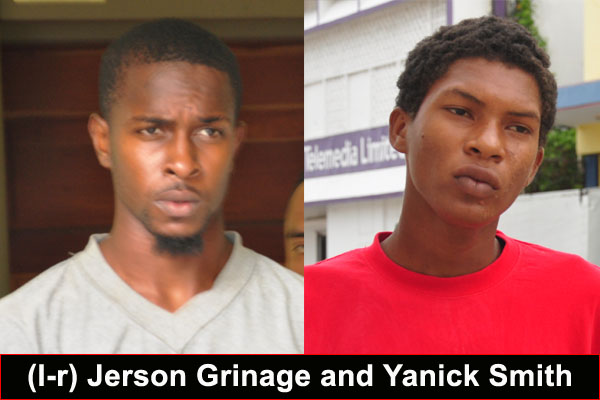 A Mahogany Heights man who was involved in a dispute with some other men was almost remanded to prison because of a false report to police that he pulled a firearm on another man.

The drama unfolded in the courtroom of Senior Magistrate Sharon Frazer this afternoon when she began arraigning Jerson Grinage, 21, a plumber, on a charge of aggravated assault with a firearm.

Before Frazer could ask him to enter a plea, however, Grinage told the court that he never pulled a gun on anyone.

Frazer then asked him how the police got the idea that he pulled a gun on the complainant.

Grinage directed the Magistrate’s attention to another man in the courtroom, who stood up and identified himself as Yanick Smith, the complainant.

Grinage told the court that he only learned about the aggravated assault charge about three hours before, when he was taken to the Queen Street Police Station after his appearance in court this morning on a single count of drug trafficking before Chief Magistrate Ann Marie Smith.

Smith then told the court that he did not want any court case.

Frazer asked him how it was that the police had a statement that he gave them, alleging that Grinage assaulted him with a 16-gauge shotgun.

“I never told the police that he had a gun,” Smith explained, “He had a machete in one hand and another object in the other hand. I never identified the object as a gun.”

But according to the report that Smith gave to police, Grinage pulled a shotgun at him, pointed it to his head and pulled the trigger more than once, but the gun snapped.

Frazer pressed him, “So you are telling me that the police made up this story with all the details?”

“I don’t remember telling him [the police who recorded the statement] that he [Grinage] pulled a gun on me,” he said.

Frazer pointed out to him that it was a woman police constable who took his statement.

Smith insisted that he never read the statement over. “I just signed it,” he said.

“I just wanted to sit down and talk with him [the accused Grinage]. I never want no court case,” Smith said, “I no recall telling the police about a gun.”

“You went to the police and gave a report that put this young man’s liberty at risk for three months. You made someone set you up to give a false report to the police. Right now, you put yourself at risk. I am still thinking about letting the police charge you for a mischievous act,” Frazer told Smith, adding, “I don’t take this lightly.”

Smith, hanging down his head and looking dejected, told the Senior Magistrate that he has never been to court before, and that he thought it was his name that was being used in connection with some tools that were stolen from Grinage’s mother.

Frazer told Smith to apologize to Grinage, before she struck out the matter.

In the matter of the drug trafficking case, Grinage pleaded not guilty to the charge and was offered bail of $1,000 plus one surety in the same amount.

According to Mahogany Heights police, on Saturday, May 31, they found Grinage in possession of 100.1 grams of cannabis, found in the garbage at his house.

The court ordered Grinage to surrender his travelling documents to the Clerk of Court before his bail could be processed.

His bail conditions are that he is to report to the Mahogany Heights Police Station every Monday, between the hours of 7:00 a.m., and 7:00 p.m.; and he cannot apply for any other travelling documents without the court’s permission.