Bolton Bank on the auction block 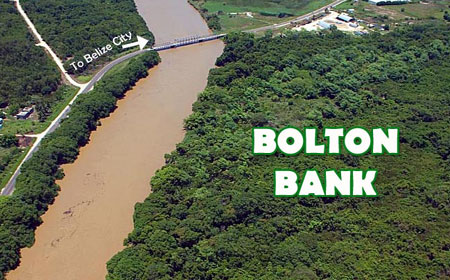 BELIZE CITY, Thurs. May 7, 2015–A virtually pristine expanse of real estate west of the Haulover Creek is being put on the auction block next month in what the seller describes as the first ultra-luxury Caribbean basin real estate auction. Whereas the property is being promoted as a “prime area for resort hotel, residential and commercial development site… suitable for a city/airport/eco-hotel conference complex, world-class casino, and championship golf course,” the Government officials we checked with say they know nothing of the plan.

Today, Amandala received a press release from Avalon Partners Ltd. in cooperation with Premiere Estates Auction Company announcing that on June 18, it will auction Bolton Bank in Belize along with a second property in the Turks and Caicos Islands.

The property is located on the unpopulated side of the Haulover Creek, on the other side of the river, on the route to Belize City from the Philip Goldson International Airport. (See photo.)

The Chief Executive Officer in the Ministry of Natural Resources, Sharon Ramclam, advised Amandala that “…Bolton Bank Limited originally owned 4,072 acres of land starting west of Haulover Creek and running along the Belize River (supposedly vide Grant No. 59 of 1868 for which a copy can only be obtained from the Archives Dept.).

She added that “…our records dating back to the last five years show that the [Ministry of Natural Resources and Agriculture] has not received any application for subdivision from the company for this property.”

We have also been advised by the Department of the Environment that no environmental impact assessment has been approved for the project, as would be required for such a development.

According to the release from Avalon Partners Ltd., “After [the] global marketing and buyer hunt has been concluded, potential buyers will be invited to bid for these spectacular properties at the auction on or before June 18, 2015.”

On its website, the developers say that the total sale price of Bolton Bank is US$10 million.

The release from the seller describes Bolton Bank as a 4,000+ acre river and sea-front mixed-use resort hotel, residential and commercial development site, located at the edge of Belize City, with access to the Northern Highway. It claims that Bolton Bank includes a historic 1-acre site – the only Jewish cemetery in all of Belize.

Avalon says that Bolton Bank “…is undeveloped, flat, covered with grasslands as well as significant tropical hardwoods. The property has the potential to become the catalyst and center for growth and development and is suitable for multiple uses: resort/hotel, private residential community, tourism theme center, cruise destination, or other mixed use, residential, and/or commercial development.”