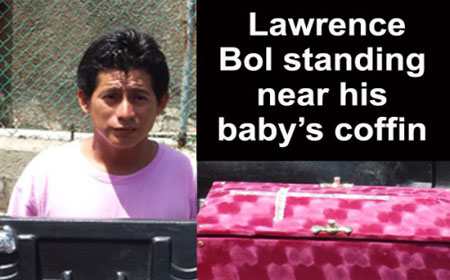 BELIZE CITY–Wrongful death lawsuits could result in awards of millions of dollars, but earlier this week, the Karl Heusner Memorial Hospital (KHMH) reached an undisclosed settlement with five of thirteen mothers who had lost their babies due to an outbreak in the Neonatal Intensive Care Unit (NICU) attributed mostly to the bacteria Enterobacter cloacae—a settlement which we learned today, from Johnny Briceño, Orange Walk Central area representative for the Opposition People’s United Party, was a mere $10,000 per child.

The matter was due to go to trial, but was submitted instead for court mediation.

“It is only at the mediation that the CEO [of KHMH] decided to make an offer—an offer of a measly $10,000 for each mother,” Briceño said in Parliament.

Attorney for the claimants, Kareem Musa, had told the media that, “…all [the mothers] really wanted was an apology from the hospital, so whether it was one dollar or a million dollars, it never mattered to them in the first place.”

Musa said that the family of the babies “…felt disrespected; they felt like the hospital just threw them under the bus and this was an opportunity for them to vent. And certainly that is one of the reasons why we took long in the conference, because they had that opportunity to vent. And it was very emotional, very traumatic, but I think they do not want to have to go through this any longer.”

While Musa took that stance, Briceño expressed outrage over the amount of the settlement, saying that, “…this is not just a slap in the face of these women or these mothers, but also an insult to the memory of these children: $10,000 for the death of 5 of the innocent children from an institution and ministry that is riddled with corruption, mismanagement and wasteful spending.”

Musa told the press that, “An apology will be coming from the hospital. That is part of the settlement and there was a financial award, and of course I cannot discuss that but those are the terms of the agreement. And I said the parties are happy and satisfied and they are moving on with their lives…”

“As soon as we found that this Enterobacter was there, we called PAHO to come and do all the investigation. And we are working there and I will invite you and your friend from Orange Walk to go at KHMH and see all the renovations that we have done for the neonatal unit, so that we can show you and the nation the extent of which we love this country that we are doing everything possible to have the health system of Belize moved to another level,” Marin said.