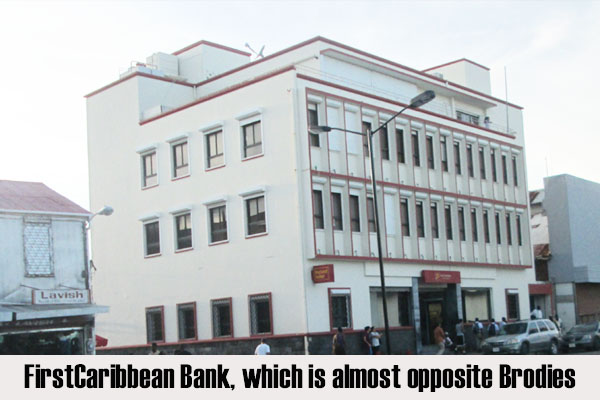 A male security guard and a female supervisor of Brodies Superstore on Albert Street were jacked at about 4:30 Saturday evening in front of the FirstCaribbean Bank on Albert Street, as the two employees were taking over $46,000 to deposit in the bank, which is almost directly across the street from Brodies.

The security guard and the supervisor told police that as they reached the bank after crossing Albert Street from Brodies, a gunman approached them from behind, pointed a gun at the security guard and demanded the money bag, which was a black plastic bag that contained four cash bags containing a total of $46,064.42.

The security guard, whose name police did not release, told police that he became fearful and handed over the money bag. He said that the thief quickly grabbed the bag and ran into Church Street, where an unknown person gave him a bicycle at the corner of Duck Lane and Church Street. The thief then rode away across the Church Street bridge and disappeared into the George Street area.

Police have since detained one individual who they believe can help them in their investigation. They say that the gunman was of brown complexion, about 5′ 9″ in height, slimly built with a low haircut, and was wearing a cap, dark shades, a light brown shirt with checkered stripes, and black long trousers.

Witnesses told Amandala that they were near Brodies listening to music at about 4:30 Saturday evening, but they had a clear view of the bank area because no cars were parked there and no one was in front of the bank. They saw the Brodies security guard and the supervisor on the sidewalk in front of FirstCaribbean Bank, and saw a man whose back was turned to them. Suddenly the man snatched the money bag from the security guard and ran down Church Street.

The witnesses said that the security guard and the lady supervisor froze for a while, then the woman began to talk on her cell phone. The security guard then came across the street and told them that he had just been jacked. He then went to the police in the area of the Supreme Court, and shortly after policemen in vehicles swarmed the area.

As of press time, the thief has not been captured or the money recovered.

The witnesses told the newspaper that they are baffled as to how the robber entered the area without being spotted. They said that if he had been standing inside the bank entrance and waiting for the cash deposits to arrive, he would have had to come out and hold up the guard on the sidewalk and they would have seen him.

The witnesses said that they usually see the guard and the supervisor going to the bank to make the cash deposit. On this occasion, they observed that the security guard froze until after the robber ran off. They believe that he froze out of fear or disbelief.