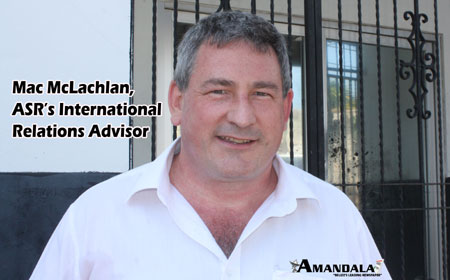 ORANGE WALK–Just last week, we reported on the plight of the Belize Sugar Cane Farmers Association (BSCFA) and its long, drawn out efforts at negotiation with factory owners Belize Sugar Industries (BSI)/American Sugar Refineries (ASR) in the hopes of reaching a mutually approved commercial agreement for the upcoming sugar crop season, which is slated for the end of this month.

The only point on which both sides agree so far, is the necessity to strike a deal before the beginning of the new season, but BSI/ASR has jumped the gun, so to speak, by working around the BSCFA and extending an olive branch to “any and all” cañeros who wish to do business with them.

It is an astonishing tactic that comes straight out of left field, and today, during a press briefing, the principals of BSI/ASR told the media about the rationale behind their decision.

“The move is not an ‘association-busting’ scheme,” but no hope for deal soon with the BSCFA: BSI/ASR

BSI’s Chief Financial Officer, Belizario Carballo, in expounding on a letter sent to the BSCFA today, said, “We do not foresee any prospect in the near future of being able to secure an agreement with the BSCFA on behalf of all sugarcane farmers. BSI will now move ahead with alternative options to secure agreement for the supply of sugarcane to BSI effective the 2014/15 crop with those farmers and associations that desire to start the crop on time. We are compelled to pursue these options in the fundamental interest of the industry, including cane farmers as an integral party.”

Vice President of ASR’s International Relations, Mac McLachlan, maintained that the move is not an “association-busting” scheme devised by the multinational company.

“You have to remember that we have been trying to negotiate this for a long period of time, and there can be to-ing and fro-ing in certain political type negotiations over bagasse, but we are now about to hit a very critical point and that is the timetable for the crop, and I think personally, that overrides other considerations.

“I believe that what we are doing is providing the opportunity for cane farmers to speak with their feet and to tell us what they think about the future. In many respects, we are forced to this position because the alternative [is] to risk having a delay in the crop, not having a crop, and all these other things, we have been talking about today since they are critical and vital for the industry”, he explained.

McLachlan noted, however, that this move does not debar their ongoing discussions with the BSCFA.

Carballo mentioned that BSI/ASR plans to hit the ground running by approaching the over 5,500 cañeros, who are divided into 370 harvesting groups, as well as individual cañeros in hopes of signing a new agreement, thereby heralding the start of the 2014-2015 sugar crop season.

The factory owners are trying to deal directly with the 5,500 cañeros instead of their association

“We have now taken a decision in light of these circumstances to move ahead to coordinate the crop with those farmers and groups of farmers who wish to deliver their cane. BSI will now pursue separate but similar agreements to the draft agreement last discussed with the BSCFA on October 9, 2014 with other associations and groups of cane farmers, and if necessary, individual cane farmers who wish to deliver their cane”, he declared.

BSI claimed that the new agreement is basically the same one that has been in existence since July of 2002, but with certain points proposed for clarification.

“The agreement is fundamentally the same as has existed in the past. The agreement sets out the formula for calculating the price for cane. It respects the 65/35 sharing ratio of net strip value for sugar and molasses sales between farmer and miller respectively which has governed previous agreements. The new element of the agreement is the inclusion of a provision to pay for bagasse which BSI had committed to as part of negotiating a new agreement”, informed Carballo.

The deadline for the signing of the new BSI proposal is November 28.

We were not able to reach any of the BSCFA representatives after the announcement of the sidestepping exercise because we understand that they were engaged in an emergency meeting late this evening.