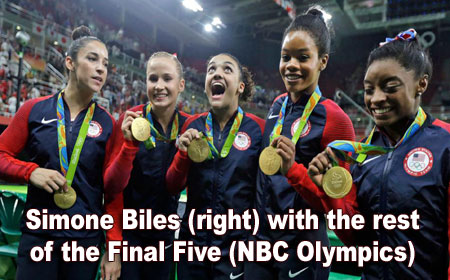 BELIZE CITY, Mon. Aug. 15, 2016–Simone Biles, the stellar US gymnast who also has Belizean citizenship, has been getting a lot of attention in the international press, and her mentions of Belize, home to her mom, Nellie Biles, as a place where she loves to relax and fish, has also meant good press for Belize’s tourism industry—the services sector that has been vital in offsetting sustained declines in Belize’s export earnings.

On Thursday night, August 11, at around 8:30 p.m., the Belize Tourism Board (BTB) made a public offer via Twitter to Biles and the US gymnastics team, known as the Final Five:

“Congrats @simone_biles! Belize is so proud of you. We’d love to host you and the entire #FinalFive on a vacation once you’re ready to relax.”

Some months ago, after Steve Harvey’s gaffe at the Miss Universe, the BTB invited Harvey via Twitter to come host the Costa Maya in Belize. Harvey “liked” the tweet but did not take up the offer to host the pageant, which had to be canceled last week due to Hurricane Earl.

Biles retweeted the BTB’s message, which had 438 likes and 138 retweets.

She replied: “my second home, you betta belize we’re coming…”

Karen Bevans, director of the BTB, told Amandala that they will be working to make the offer to Biles and the Final Five a reality. The others are Gabby Douglas, Aly Raisman, Laurie Hernandez and Madison Kocian.

“We will send an official correspondence to her through the official communication lines,” she told us.

What would the BTB be offering to Biles and the Final Five?

“It would definitely be some of the main destinations of Belize. In addition to that, we saw a post that she wrote last year that she loves fishing in Belize. We want her to enjoy more fishing, in addition to other main attractions of Belize,” Bevans told us.

There have been critics who have come down on the BTB, for “wining and dining foreign talent for publicity…”

Bevans said, “Belize has a lot to offer and our mandate at the BTB is to tell Belize’s story. We would want the world to listen to our story.”

She said that this is an opportunity for Belize to tell its story through influential people who have a lot of followers.

Her recent interviews with the international press are one reason why the BTB made the offer to her. In her Q&A with NBC Olympics, she said that fishing in Belize is among her favorite hobbies. When asked about her family, she said that her dad is from Cleveland, Ohio, but her mom (speaking of her adoptive mom) is from Belize.

Nellie Biles, the daughter of the late Silas Cayetano, a Garifuna man of Belize, adopted Simone and her sister in 2001. Simone is the biological granddaughter of Nellie’s husband, Ron, an American. Her biological mother is Shanon Biles.

Although there are Belizeans who are criticizing other Belizeans for making a big deal over Biles, because she has “no biological ties” to the Jewel, others have acknowledged her Belizean nationality and adoptive ties to Belize through her grandmother, through whom she has come to know Belize.

Asked what has been the most moving/special place to which she has traveled and why, she listed Belgium and Belize, to which she loves to travel because Belize is a “relaxing place.”

For the BTB, it matters that she is a Belizean, since she would bring credibility with her story.

The BTB decided to invite the entire Final Five, Bevans said, because “we believe that she was not in the limelight alone.”

She said that involving the entire team should also have a multiplier effect.

She said that stakeholders in the tourism sector say that it is a brilliant way to share what Belize has to offer, and they want to jump on-board in supporting the vacation offer to the Final Five, and some accommodations are already offering to host Biles and the Final Five.