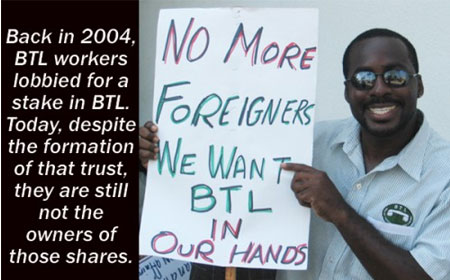 BELIZE CITY, Thurs. Sept. 17, 2015–Despite meeting with members of the Union executive of the Belize Communication Workers’ Union (BCWU) on Monday, September 14, 2015, Anwar Barrow, the Prime Minister’s son and Chairman of the Executive Committee at BTL, was not brave enough tell the Union that daddy was calling a press conference less than two hours later to announce that the government had arrived at a settlement with the Lord himself.

The Union says the gross disrespect goes beyond anything they had experienced under “smart” Said!

In an effort to maintain a harmonious and healthy industrial relations climate with the UDP Government and the Management of BTL, the BCWU has been a silent pillar of support, convinced that the Prime Minister’s decision to nationalize the company was for the greater good of Belize and the BTL employees.

The nationalization ended the era of exploitation where the Ashcroft Group was yanking some $70 million every year out of the Belize economy in dividend payments over a two-year period, had mortgaged off the company’s assets for US $22.5 million, and appeared intent on winding up the company.

BTL, for many years, has been the goose that lays the golden eggs, and now we know the price of those golden eggs. The chickens have come home to roost.

During the period of nationalization, the BTL employees have silently endured acts of bad faith and disrespect by management toward union members and its executive. The Union and its members were stunned to learn on Monday, September 14, 2015, that the hostile relationship between the Ashcroft Group and Barrow Government had changed overnight to one of rapprochement, unbeknownst to the people of Belize, the employees of the company and the Union.

What we learnt is that the Barrow Government was acting from the same script as the Musa Government, but more polished and more secretive actors were starring in the film that has now become known as Déjà Vu BTL.

But the script has remained the same:

1. Secret meetings that involved only two or three people on the Government’s part;

2. Total secrecy with respect to the meetings;

3. Indifference to the employees who have a vested interest in the company through the employee trust and the shares being held in trust for them;

4. The significantly high cost of the settlement with a bill running $162 million plus and an undetermined portion yet to be added;

5. The rush to dash through the backdoor of the National Assembly building to the Governor-General’s front door to get his assent for the act to become law; and,

6. The intentional refusal to extend some courtesy to the Union and advise of “secret negotiations” leading to a settlement that was ongoing.
The Musa Administration enriched the Ashcroft Group by giving them a 15% return on investment through the Accommodation

Agreement. The Barrow Administration has done worse by saddling all Belizeans, from the cradle to those on their way to their graves, with a whopping $162 million plus of Belizean sweat dollars to the national debt, a figure that represents more than 15% of the national debt, and that is not the final figure due to Ashcroft!!!

This money will come from dividends due shareholders, Social Security contributions, and the hard earned dollars of BTL’s customers. All this was done in secrecy to make Mr. Ashcroft happy and a bunch of lawyers millions of dollars richer while we, the taxpayers of Belize, and workers of BTL, must now carry this increased debt burden with us every day.

This is a slap in the face of all Belizeans!!!

Now we know for certain that there is no difference between the PUP and the UDP. Both Musa and Barrow have failed us and now we are forced to wonder all over again “if we change monkey fu black dog,” and the following:

– Will we have our jobs next year?

– What about our bonuses?

– What about the downsizing and headcount gossip?

– And what about CBA for the next 3 years?

All the substance of these “secret negotiations”, including campaign money, must be disclosed. The people also need to know what else Ashcroft will get as a part of the settlement when Barrow wins his third term. You have taken us for fools, Mr. PM, and we are disgusted.

Remember, we have lingering issues to be resolved and there will be a cost in bringing those to a resolution. Among them are:

i. Workers’ health issues that the Union brought up but were never addressed or treated as a priority;

ii. The culture of fear that management has created and promotes;

iii. Management’s blatant disrespect of the Union and its members; and,

iv. The disrespect of the company executives toward union executives who have always acted in good faith and waited with patience for issues raised to be addressed.

The company executives have not acted in good faith towards the union’s executive because they never advise and consult us on matters that affect our members and other employees in our bargaining unit.

There is a weird feeling that this is 2005 all over, with a little more sophistication.