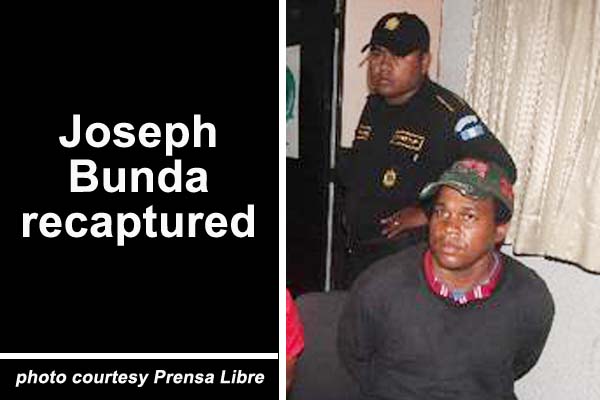 Amandala received official confirmation today that Joseph Budna, 33, the Belizean who fled the custody of Guatemalan authorities on Monday while receiving treatment at a Guatemala hospital, has been recaptured.

H.E. Alfredo Martinez, Belize’s Ambassador in Guatemala, indicated that Budna was recaptured in the Department of Chiquimula, while attempting to enter Honduras.

“People in the area recognized his photo and called the police. He was accompanied by two persons who purportedly were ‘helping’ him cross into Honduras,” the Ambassador explained.

Prensa Libre’s Friday edition quoted Budna as saying that he opted to escape when one of the guards fell asleep and the other was having an affair with a woman who was at the hospital to care for her critically ill husband. Budna said that he planned his escape because of the treatment he was receiving while in prison.

After Budna’s escape, the guards were arrested as part of a probe into possible negligence or collusion.

We were also advised that he still has to appear before Guatemala courts for three more cases pending for kidnapping and extortion.

Budna’s 25-year conviction was handed down in August 2012 for the kidnapping of a US teenager, Luis Byron Reyes Onofre.

He may face added jail time for escape.