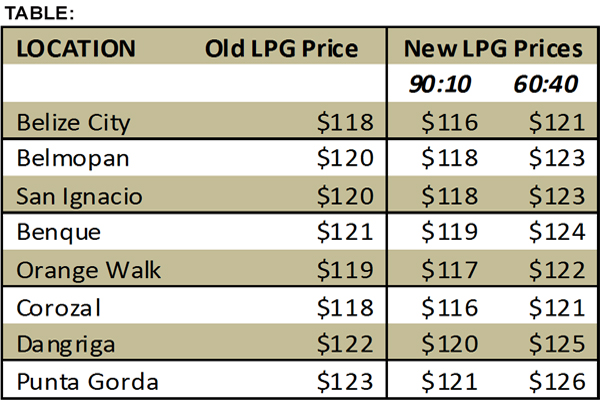 On Saturday, new LPG prices came into effect, according to a release from the Belize Bureau of Standards. The new price schedule is different from that which was released last month in that it has two price tiers, depending on the quality of the butane.

Amandala was told that because there is a higher demand for butane in colder months, the impacts are felt in the local market, with LPG prices escalating and quality eroding.

A spokesperson of the Bureau of Standards has advised Amandala that although the 60:40 butane is the standard for the local industry, Belizean importers are being allowed to bring in the 90:10 in the winter months.

One local retailer told us that the 10% butane mix would require more gas to make the 100-pound, since it is lighter, and the LPG which is 90:10 would also burn faster than the other butane—which means that it would be used up more quickly.

We also understand that there may be safety concerns – since the propane is more pressurized than the butane and filling weak or seriously corroded tanks is not advisable.

The Belize Bureau of Standards notes that “the difference in prices is attributed to the scarce supply of butane during winter months.”

How will you know whether you are getting 10% butane or 40% butane in your gas tank?

The Belize Bureau of Standards advises that, “Consumers are therefore encouraged to look out for labeling and marking of LPG mixtures which suppliers are required to place on fixed installations at plants and on mobile units.”

Belize Natural Energy, which produces Belizean butane and propane, prices theirs for $109 per 100-pound cylinder, the company told us. The proportion of butane varies, but is usually in the range of 40%, Amandala was told.

According to the Bureau of Standards, Belize Western Energy Limited, Southern Choice Butane/Zeta Gas, and Gas Tomza Limited import from Central America and should charge the lower controlled prices.

Please note that prices vary, depending on the locality of purchase, as shown in the graph and table.

LPG, generally, is the costliest in Punta Gorda. However, the BNE retailer – Caribbean Gas Limited – told us today that they are now selling for $90 per 100-pound cylinder. We could not verify with them, though, if the quality is 60:40 or 90:10 or somewhere in between.