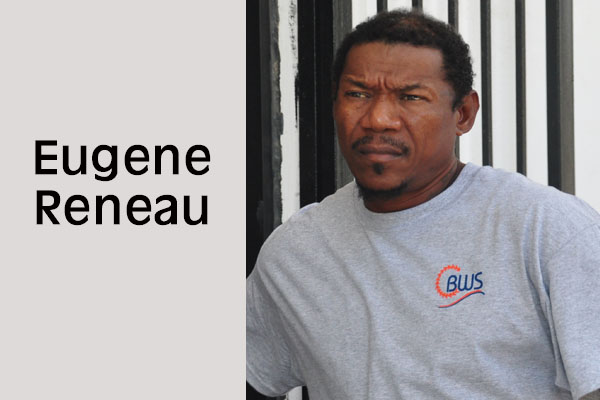 A Belize City man who is employed at Belize Water Services Limited (BWSL) as a field worker was arraigned on a single count of rape when he appeared before Chief Magistrate Ann Marie Smith this morning.

The accused man, Eugene “Portion” Reneau, 51, did not have to enter a plea, because his case will be heard on indictment after a preliminary inquiry is held to determine if there is a prima facie case against him.

Reneau, a resident of 59 North Front Street, was released on a $1,000 bail, plus one surety in the same amount, and his case was adjourned to May 29.

The allegation against Reneau is that on Friday, March 28, at about 2:30 a.m., he raped a 26-year-old Ladyville woman, who told police that he put a knife to her throat.

According to a police report, Ladyville police, acting on information they received, visited an area around Mile 10½ on the Philip Goldson Highway in Ladyville, where they saw a man, and a woman of Creole descent, about ten feet from the roadside, in the swamp, standing in a pool of water.

Police observed that the man had the woman’s mouth covered and was holding her against her will, as she appeared to be struggling to escape.

Police ordered the two to come out of the pool of water.

The woman immediately reported to police that the man had held a knife to her throat and had threatened to kill her if she did not allow him to have sex with her.

She told police that in fear for her life, she had complied and had sex with the man against her will.

Police escorted the woman to the Karl Heusner Memorial Hospital and detained the man, who was identified as Reneau, and charged him for rape.