US calls out Gambia prez for classifying LGBT as “vermin” 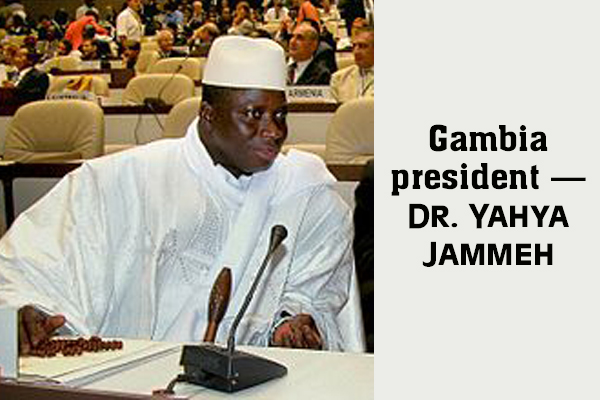 The US has called out Gambia’s president, Dr. Yahya Jammeh, after statements he made on the occasion of the country’s 49th anniversary of its independence from Britain this week and broadcast on national television.

Jammeh said that, “We will fight these vermins called homosexuals or gays the same way we are fighting malaria-causing mosquitoes, if not more aggressively.”

Jammeh said they would not accept any friendship, aid or any other gesture that is conditional on accepting homosexuals or LGBT, which, he said, stands for Leprosy, Gonorrhoea, Bacteria and Tuberculosis.

The United States has issued a strong response to Jammeh’s most recent comments, characterizing homosexuals as vermin.

“The United States is deeply troubled by the hateful rhetoric used by President Jammeh in his National Day speech on February 18,” the US Department of State said in a statement released Wednesday.

The statement added that all people are created equal and should be able to live free from discrimination, and that includes discrimination based on sexual identity and sexual orientation.

“We call on the Government of The Gambia to protect the human rights of all Gambians, and we encourage the international community to send a clear signal that statements of this nature have no place in the public dialogue and are unacceptable.”

In the country of Gambia, which recently detached itself from The Commonwealth of Nations, cross-dressing and having sexual intercourse “against the order of nature” are deemed to be offences which carry prison terms of up to 5 and 14 years, respectively.

Some human rights proponents say that criminalizing the act of a man dressing as a woman breaches that person’s right to self-expression.

The US statement said in its statement that human rights and fundamental freedoms belong to all individuals.

It closes by saying that, “The United States stands by you no matter where you are and no matter who you love.”