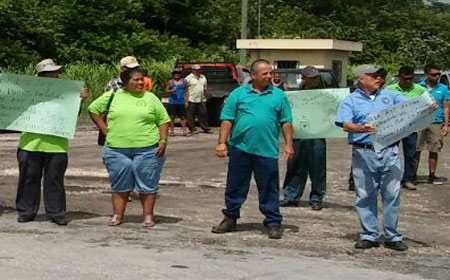 TOWER HILL, Orange Walk District, Fri. July 29, 2016–About 200 cane farmers of the Orange Walk and Corozal Districts and some of their family members carried out a peaceful demonstration today against American Sugar Refining (ASR), a sugar company operating the Belize Sugar Industries at Tower Hill, Orange Walk. The protest began at 9:00 this morning and lasted until 1:00 this afternoon, at the junction of the Tower Hill road and the Philip Goldson Highway.

The farmers are angry because their second payment for their product was short of $209,000, which the sugar company deducted from their payment because some of the molasses produced by the factory had gone bad.

Normally, the revenues from the molasses would be split – 65% going to the company and 35% to the farmers. However, the farmers did not receive those revenues.

They contend that they bear no fault whatsoever in the spoilage of the molasses and so they should not be made to pay for the incompetence of the company.

According to the company, the loss was caused by a “Maillard Reaction” which they alleged was due to the quality of cane received during the 2016 crop. The company stated that the cane delivered contained high levels of reducing sugars, which caused the reaction when combined with high ambient temperatures. The farmers have strongly disagreed with this claim and demand an apology from the company.

The farmers are also angry over a reduction in payment for sugar cane delivered to the factory. They said that the second payment which they received on Wednesday was less than they had expected, amounting to $15 less than what was paid for the second payment last season. They were told that this was because sugar prices have fallen.

Alfredo Ortega, organizer of the demonstration and president of the Orange Walk branch of the Belize Cane Farmers Association, told Amandala that the farmers are being taken advantage of, and the demonstration is sending a message to the company, to which they are also making demands.

Ortega said that they are demanding that a private investigator be appointed to investigate what caused the molasses to be spoilt, and the investigator should also determine the actual quantity of molasses spoilt.

They are concerned that they could suffer further losses if it is determined that the amount of molasses that was spoilt is more than had originally been reported. They want to know from an independent and neutral party—not from the sugar company, which Ortega said they do not trust.

Ortega said that the quality of the sugar cane has improved since 2010, and so their cane is not a factor in spoilage of the molasses. Moreover, after the cane is weighed and delivered to the company, it becomes the property of the company, and what happens to it no longer concerns them. They go back to their fields and the company grinds the cane in the mill.

Ortega said that farmers too have to absorb losses. Some of the farmers have lost up to 60 percent of the cane in their field which was undelivered last season, but the company has not helped them or given them any compensation for that.

He said that at the start of the season, the farmers go into the bank for loans based on the initial price of cane announced by the company, but as the season progressed the price was reduced, making the farmers unable to pay their loans.

On many occasions, they are just given a receipt for the payment deposited in their bank accounts, but they cannot get a dime in their pocket because the amount paid is insufficient to cover their loans.

Many of the farmers are facing hardships and are finding it difficult to maintain their families; now on top of that, they must suffer for the loss of the molasses at the factory, Ortega lamented.

He said that they have written a letter to the regulators, asking them to address the injustice, but he doubts that anything will be done.

He said that there is a range of issues that clearly demonstrate that the farmers are being taken advantage of and that they are now like slaves to the ASR.

He said that they have not gotten a reply from BSI and are not yet sure if the money deducted for spoilt molasses will be refunded to the cane farmers. Ortega said that they are planning to continue protesting in the coming week.