Catherine Cumberbatch, 52, is the first woman to be named Chief Meteorologist in Belize 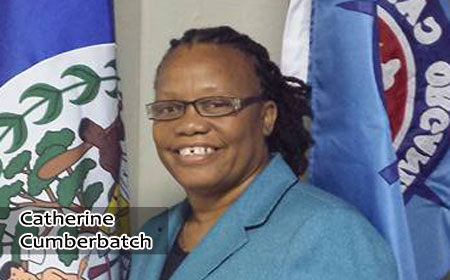 BELIZE CITY, Thurs. Dec. 1, 2016–   The Ministry of Transport and National Emergency Management has announced changes in the leadership of the Meteorology Department. Former Chief Meteorologist, Dennis Gonguez, who turns 55 later this month, has retired, and Ms. Catherine Cumberbatch, former deputy, has been promoted to lead the team of 28 staff members.

Her journey began in 1987, when she joined the team at the class IV level—the bottommost rank—as a weather observer. A graduate of Belize Technical College (BCT), Cumberbatch’s first job at the Met Office was to observe weather conditions every hour in the environs to support aviation.

Cumberbatch said: “I grew up in one of the poorest areas of Belize City, on West Street in the Mesopotamia Division, and went to two of the poorest schools. I went to Calvary Temple Primary School and graduated from Excelsior High School. I then went on to the Belize Technical College and I did the Senior Secondary course, and then I went on to Belize Technical College’s 6th Form, majoring in the sciences.”

Cumberbatch, now 52, was determined to shatter the stereotypes about women in the workplace. She was offered the opportunity to do a six-month course at the Caribbean Institute of Meteorology and Hydrology in Barbados.

After her return, she was promoted to the class III level, and placed in climatology. She did data entry and quality control on observed data from the network of weather stations across the country. She was offered the opportunity to do training (for 18 months) in 2000, and on her return she was promoted to class II Met Officer in 2001. This enabled her to gain her first classification as a forecaster.

In 2003, she applied to the University of the West Indies to enter their degree program. She was accepted but needed a scholarship. She travelled to Belmopan with all her credentials and went to see then Chief Executive Officer in the Ministry of Education, Ms. Marion McNab, to apply for a scholarship. McNab submitted her application for consideration for the Professional and Technical scholarship awarded by the Government, and Cumberbatch received a call about a week later informing her that she was among those who were picked for the award. This enabled her to do her dual degree at UWI, Barbados, in Meteorology and Math.

She returned in 2006 and was placed back at the forecasting desk. When, the former deputy, Mrs. Ann Gordon, retired, Cumberbatch became the second female to hold the position of deputy at the Met Office.

Cumberbatch said: “I aimed that one day, I will be the first woman Chief Met officer and here I am today!”

Cumberbatch told us that when she joined the Met office, she also joined the Belize Defence Force (BDF) volunteer element, where she served for 22 years. She was the lead saxophone player in the BDF band and also an infantry soldier.

She told us that her biggest motivators have been her mother, Mrs. Marie Cumberbatch; her late father, Mr. Knox Cumberbatch; and her late sister, Ann Marie Elizabeth Cumberbatch. She said that her professional success was her sister’s dream, and also the dream of her parents and other siblings. She attributes her success to God, her family and her dear friends, who she said are overwhelmed with joy.

Derrick Rudon has been named as the new deputy at the Met Office. Rudon also has more than 30 years’ experience in the field of meteorology.

Both Cumberbatch and Rudon hold honors degrees in Meteorology and Mathematics from the University of Cave Hill Campus in Barbados.