Cave-tubing.com professes innocence in case of brutality against competitor 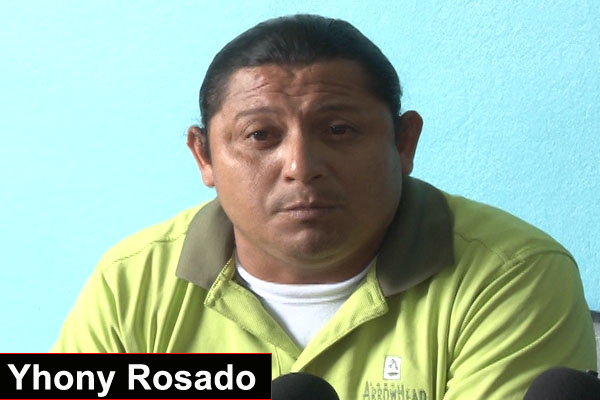 The management and staff of Cave-tubing.com – a local tour operator – called a press conference at the office of their attorney, Audrey Matura-Shepherd, this afternoon, to attempt to clear their name after being accused of being involved in the savage beating of a member of a rival tour company last Thursday.

Vitalino Reyes, Jr., is reportedly in a coma at the Karl Heusner Memorial Hospital (KHMH) after being badly beaten by a group of men, allegedly from Cavetubing.com, in a bar off Coney Drive, and Yoney Vega, who told police that he was with Reyes in the bar, said that he himself was a victim of the attack.

Vega claimed to police that he and Reyes were surrounded by men from Cave-tubing.com when they were about to leave the establishment, and that after being stoned with pint bottles, they were both beaten unconscious.

While Vega has recovered, his friend, Reyes, Jr., is said to be in a coma at the KHMH.

Today, in a press conference held by the owner of Cave-tubing.com, Yhony Rosado, he told the media that he was with 5 of his employees and 2 friends socializing at Long Island Bar, where the incident took place last Thursday, May 29, and admitted that he did see the victims, Vitalino Reyes, Jr., and Yoney Vega, at the bar counter, but “at no time did they have any exchange of glances, words or any physical contact” with Reyes and Vega.

In relating his version of the events today, Rosado told us that he was surprised when he began receiving calls from the media in reference to the allegations, and maintained that his crew was in a separate corner of the establishment from where Reyes and Vega were.

He said, “On Friday, they started calling me for interviews about Vitalino Reyes, Jr., and I told them that I had nothing to say, because I did not have anything to do with that young man. I didn’t believe that he ended up in the hospital in a coma. I understand he was at Long Island; we were there also, but in another corner, and something happened behind the music box where he was sitting with him and some other patrons. I have nothing to do with that young man in a coma; he probably got into an altercation with someone else; I don’t know, because I wasn’t paying him any mind.”

According to Rosado, the bar had several patrons and while the music was playing, there was a sudden noise, after which Rosado and all his employees turned around to see Vitalino, Jr., on the floor beside the music box, and Vega was also observed stretched out some distance away from the bar counter where he and Reyes once stood.

Rosado mentioned that one of his employees is currently in police custody pending further police investigations, but noted that the person who is detained was not even there with him, in the bar, when the incident took place.

While Vega had claimed that he and Reyes were surrounded when they were about to leave the establishment, Rosado gave an entirely different account of what took place.

“We were like 20 to 25 feet from where it [the fight] happened. One story in the media stated that Vitalino was inside the van and my guys took him out. It didn’t happen like that. It happened by a music box, and I did my own investigations, and I found that they [Reyes and Vega] were going to change the music. We were in the other corner, so we did not see what happened, and we have nothing to hide”, said Rosado.

Rosado also stated that he and his employees have all given police statements explaining the little they noticed, saw and knew.

One interesting portion of the report given by the affiliates of Cave-tubing.com alleges that Vitalino and Vega were “highly intoxicated;” however, they were “still very much conscious, albeit staggering” when they were escorted from the bar. They said that both men walked without police help and that Vitalino, Jr., was taken in the back of the police vehicle, while Vega was taken by police in the van that the duo had arrived in.

Matura-Shepherd, Rosado’s attorney, called on police to investigate what transpired during the time period between the point when Reyes and Vega were taken from the bar, and the time at which they were transported to the hospital.

She said, “When those guys left, they were conscious, and we are calling on police to investigate from the minute they [Reyes and Vega] were taken into police custody, to the minute they reached the hospital. What happened from that point they left the bar and were taken to the hospital, we don’t know, but the police need to investigate, because that same night the young man [Reyes] was taken into the hospital unconscious, so not even his companion, who was with him, knew what happened, because they were in separate vehicles.”

The release, issued at the press conference, concluded by saying that the “false allegations” by Vitalino, Jr.’s companion are “malicious and outright defamatory”, and will only serve to make them (Cave-tubing.com) a target and fuel an already existing feud between the Reyes and the Rosados.