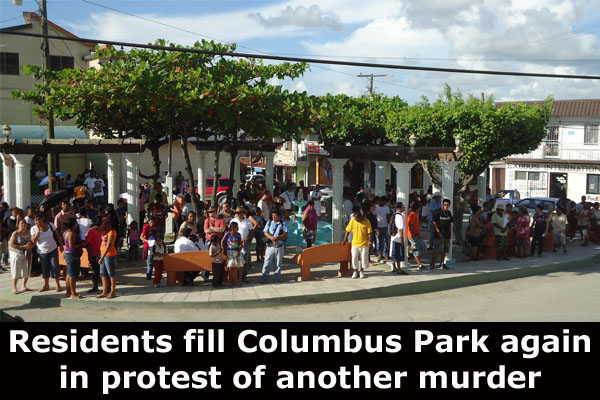 On another hot afternoon in the Twin Towns, the anger was clearly present in the body language and gestures of the 100 to 150 residents gathered inside the Columbus Park in the downtown area to protest the recent death of University of Belize student Suzenne Martinez, 21.

Suzenne’s body was found dumped in a ditch at the side of 18th Street, not far from where she lived, early yesterday morning, Wednesday, October 3.

By the end of the day, police had been led to their key suspect, who was out on bail for a prior offense and has since been linked to the Monday morning home invasion/murder at the residence of Belizean-American retiree Robert Lewis, 53, in Belmopan.

At press time, the suspect has yet to be charged, as police are awaiting directives from the office of the Director of Public Prosecution and continue to gather more evidence.

But after showing their might when Bert Vasquez was captured, arrested and charged in June following the death of Jasmine Lowe, 13, when a large crowd watched the Department’s every move and Vasquez came close to losing his head to the mob, today residents of San Ignacio and Santa Elena came out once again, not with that fiery emotion, but still resolute, to show support to Suzenne’s grieving family, pressure the police to move a little faster, and call on authorities to begin doing more, including authorizing the return of the death penalty.

The group demonstrated via motorcade through the Twin Towns of Santa Elena and San Ignacio before rallying at the Columbus Park, across from the Police Station, until 4:00 p.m.

Cayo businessman, Marcel Bedran, told reporters that Belizeans seem to be afraid to ask the tough questions to our authorities, particularly on the issue of capital punishment: “Why is it so secretive, why can’t we talk about it? How long are we going to continue? This weekend that passed there were seven murders in this country. We have jumped 100 murders and we have just started this month of October. Last year was 128, the year before was 132; you tell me, where will we draw the red line, and say anything beyond this we need to go…drastic situations call for drastic measures.”

Bedran went on to call for a referendum by authorities on the issue. Earlier this year Prime Minister Dean Barrow had “washed his hands,” throwing the issue out to the Caribbean Court of Justice (CCJ).

Vice President of the local Neighborhood Watch Association, Ernie Braun, meanwhile questioned why this suspect and others are repeatedly getting out on bail and committing other serious offenses: “Who is in charge here?” he asked, calling on the public to come together and make noise and make the authorities take notice.

Eduardo Juan, resident of Santa Elena, called on authorities to toughen the law on bail: “…stop that fool about giving corrupted people, criminals, bail. For instance, rape should never have bail; we had that enacted before! Child molestation should never have bail! And the criminals that murder our young people should be lynched; they should not even be tried in court…”

On the local front, Bedran and Juan called on the town’s men to step forward and do more to protect their children and young ones, and mentioned that this murder is even more painful than that of Jasmine because many of the town’s residents knew of Suzenne, a promising science student who wanted to become a forensic psychologist.

Juan, noting that no politician was present today, added that residents should continue to join the neighborhood watch and other community groups, also noting that they had the support of new Cayo OC, Supt. Ralph Moody.

From Belmopan, pastor and television journalist Louis Wade reminded the audience that they are already setting a positive pace for all of Belize: “…you are giving the rest of the country courage that they don’t have. Everybody talk, but you are taking the talk and putting it into action. Don’t go back, go forward; take it to another level…” He added that in the Jasmine Lowe and Suzenne Martinez cases, the perpetrators and their ilk seem to believe that Cayoans are vulnerable when they in fact are not.

Tomorrow, at 2:00 p.m., Suzenne will be laid to rest, and then at 6:00 p.m., residents will gather again at Columbus Park for a candlelight vigil. Whether the suspect in her murder will be charged and arraigned by then remains to be seen.