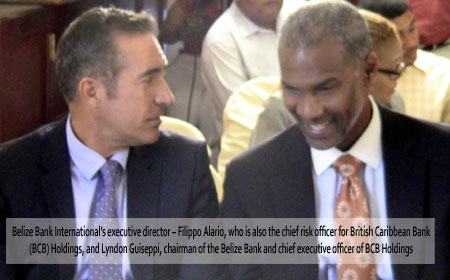 BELIZE CITY, Wed. Apr. 29, 2015–Bank of America principals who met with a high-level team of Government officials, including Prime Minister and Minister of Finance Dean Barrow; Central Bank Governor Glenford Ysaguirre and Economic Advisor, Ambassador Mark Espat, have given their assurance that the bank is severing relations only with the Belize Bank, and not with any other domestic bank in Belize which has correspondent banking relations with the second largest bank in the USA.

Barrow said that based on their conversation with the bank executives, “…there is no question of any kind of wrongdoing on the part of the Belize Bank.” He added that, “…nobody needs to feel that he or she has to stop doing business with the Belize Bank.”

At a press conference, attended by Belize Bank International’s executive director – Filippo Alario, who is also the chief risk officer for British Caribbean Bank (BCB) Holdings, and Lyndon Guiseppi, chairman of the Belize Bank and chief executive officer of BCB Holdings, Barrow said that the Bank of America principals with whom he and his team had met in Miami on Monday had indicated that the move is due to a “business model mismatch” between the two banks.

After Thursday, April 30, 2015, Bank of America will no longer have correspondent banking relations with the Belize Bank. Barrow explained that Belize Bank will still be able to service the bulk of its clients with credit card transactions, but wire transfers for Belize Bank customers might have to be done via the Central Bank on behalf of those clients. However, Barrow added that this does not mean that the Central Bank will step into the shoes of the Belize Bank and do wire transfers for every client of the bank.

According to Barrow, Bank of America has claimed that there is a matrix of factors that resulted in their decision to sever relations with the Belize Bank, but none of those factors had anything to do with any alleged wrongdoing or irregularity by the Belize Bank.

He said that the Government will support the Belize Bank in trying to overcome this temporary setback, although he has had his difficulties with the principal shareholder of the Belize Bank – British billionaire Michael Ashcroft. Barrow noted that the Belize Bank does enjoy the largest market share in Belize, and it services a number of sectors of the economy.

It is to be noted that both the domestic and international banking enterprises of the Belize Bank have lost correspondent banking relations with Bank of America.