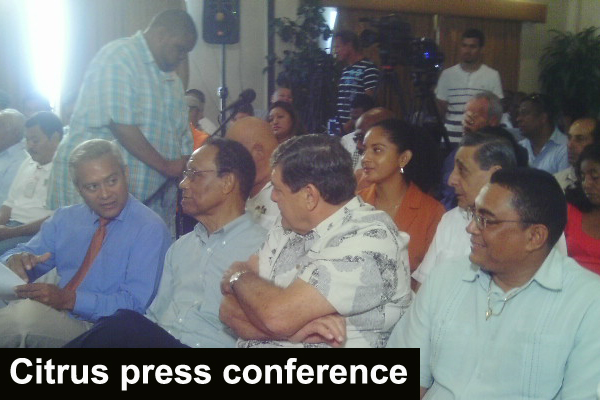 “It’s being bogged down in technicalities” – CGA’s attorneys

The contentious rift between citrus stakeholders Citrus Growers Association (CGA) and Banks Holdings Ltd. has reared its ugly head once again – this time leading to a delay in the signing of a crucial Memorandum of Understanding (MOU) which should have been finalized last Wednesday, February 19.

Tonight, Amandala managed to speak with CGA executive Denzil Jenkins, who told us that CGA is optimistic that an agreement will be reached as soon as “the i’s are dotted and the t’s are crossed.”

Reliable sources within the citrus industry told Amandala earlier today that both parties were apparently still trying to “iron out” issues regarding “certain technicalities and legalities in terms of the MOU.”

Amandala understands that the current disagreement is over an addendum which was inserted by Banks Holdings into the MOU – one with which the CGA does not agree. The CGA’s attorneys reportedly described the MOU as being “bogged down with technicalities.”

Our source notified us that presently, the documents are still being scrutinized by the attorneys for all parties concerned, including the CGA, Banks Holdings and the Social Security Board (SSB).

Last Monday, February 17, due to what he said was a “fierce, intractable deadlock” in the citrus industry, Prime Minister Dean Barrow – flanked by most citrus industry stakeholders – unveiled a 24-million dollar proposal in which arrangements were being made for First Caribbean International Bank (FCIB) to advance to the Citrus Products of Belize Ltd (CPBL) immediate working capital so that the processing company could make outstanding payments to citrus farmers.

The proposal also involved GOB temporarily taking over FCIB’s loan facility with CPBL, because, ultimately, the plan is for the Social Security Board (SSB) to take over the loan from Government after the necessary paperwork has been completed.

When all arrangements are finalized, SSB would have ended up injecting some 24 million dollars since it would also write off CGA’s debt to the tune of 9.1 million dollars in exchange for 10 percent of the CGA’s 51 percent shares. With that share-swap, the CGA would now only have 41 percent shares in CPBL, while Banks Holdings will be the biggest shareholder with nearly 47 percent of the shares. This new configuration would also lead to the CPBL board being reconstituted.

All those details are embedded in the MOU that was to have been signed by both parties last week. Jenkins told us tonight that there is still no indication when all parties would sign on to the MOU.

While it appears that the constant back-and-forth that has sometimes landed both parties in court is ever-present, a crisis situation was reached in the past few weeks after the primary shareholders of CPBL – Banks Holdings Ltd. of Barbados, and the Citrus Growers Association of Belize – could not reach agreement on the selection of an auditor.

And with the selection of an auditor being a key component of CPBL’s covenant with their creditors, those creditors – Heritage Bank and First Caribbean International Bank – froze its accounts. CPBL therefore could not pay farmers outstanding monies for fruit delivered to the tune of some 3 million dollars and counting.

While the hope is that all parties would sign off on the MOU sometime this week, no one knows for sure when it will be signed, and according to our source, it is “hurting the industry tremendously.”

This is notably only a portion of the mounting payments that CPBL currently owes the citrus farmers. According to the release, the remaining payments for the weeks of February 11 and 18 would not be released until CPBL receives funding from the Government, and we understand that funding won’t be available until after the MOU is signed.