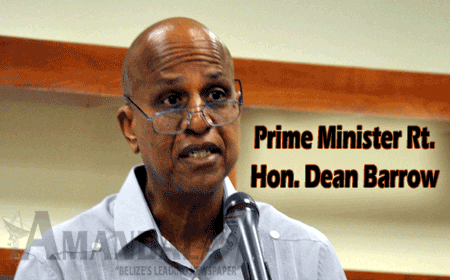 BELIZE CITY, Thurs. Aug. 25, 2016–On the heels of an IMF prescription for immediate tax increases during the Said Musa administration of 2004, the then Opposition United Democratic Party (UDP) called an emergency town meeting on November 17, 2004, at which then Opposition Leader Dean Barrow roared, “The problem with this government is the fact of their undiluted corruption. Promises have been made by them that they have no intention of keeping, that they’re incapable of keeping. But I tell you any UDP government that I lead will never be engaged in corruption! As soon as it rears its ugly head, I personally will cut it off. And I will tell you I will sharpen a special machete with blades on two sides so that every time it springs upright, so I will chop it off. And if it means the government has to fall, then so be it. Let the consequences be damned, the people of this country deserve better and I am determined to give them better.”

Nine years later on October 11, 2013, at a press conference after allegations of a visa hustle emerged in which the Cayo North East area representative, Elvin Penner, was accused of selling immigration documents to Won Hong Kim, a South Korean who was in a Taiwanese prison, Dean Barrow, now Prime Minister, said that he told his Cabinet, “If there is one thing that can and would bring down this government, it is hustling in Immigration. I have heard that ministers are procuring visas for people. I’ve said pretty much in every second Cabinet, if you [the Ministers] are doing so (I have no proof), for God sakes stop it! Stop it! That is what would cause the government to fall.”

“… any UDP government that I lead will never be engaged in corruption! As soon as it rears its ugly head, I personally will cut it off!”

“And I tell you, I will sharpen a special machete with blades on two sides so that every time it [corruption] springs upright, so I will chop it off. And if it means the government has to fall, then so be it.” — Opposition Leader Dean Barrow on November 17, 2004.

At the press conference, in speaking about the allegation that Penner was involved in the sale of immigration documents to “Citizen Kim,” as he was then dubbed, in what appeared to be a visa hustle, Prime Minister Dean Barrow commented, “I have also said that I understand that politicians have friends and I know that processes can be slow. If a Minister says, ‘I did ask the Immigration Department to bring some speed to the processing of an application for a visa for a friend,’ it is entirely legitimate as Minister.”

He further stated, “I satisfied myself that the application for the visa was in order. I can’t say that that is not to happen, but if I hear you intervene 10 times and I hear you intervene 20 times — what am I to think? Except that you’re involved in a hustle. If you hang out with Alibaba you must be one of the 40 thieves.”

About a year later on January 24, 2014, when allegations of corruption surfaced about Barrow’s colleague from Belize Rural North, Edmund Castro — that he used monies from the Belize Airport Authority for his personal use, Barrow came to his aid, informing Belizeans that, “This is not corruption. The Airports Authority, in the full exercise of their jurisdiction, obviously assisted the Minister on several different occasions.”

“I will tell you right now – I find it utterly and completely distasteful, and I think the Airports Authority and the Minister are both wrong …. So don’t think I am here making any apology for them, but call it what it is – it is not corruption. He didn’t steal the money from the Airports Authority; he didn’t get the money under false pretenses. He obviously was of the view that the Airports Authority – which is a statutory body associated with the section of the Ministry for which he is responsible – could be asked to assist him and his constituents politically. I don’t say that it is right, but that practice is as ancient as the hills,” Barrow said.

Then, almost one month ago, on July 21, 2016, after the man accused of being involved in the beheading of Pastor Llewellyn Lucas, William “Danny” Mason was arrested, Barrow’s colleague from Belmopan, John Saldivar, conceded to accepting financial donations from him and visiting his home. Barrow came to Saldivar’s aid, exclaiming, “I will not accept that my administration is riddled with corruption. I will not claim that there is no corruption either; I would be foolish, I would be dishonest and I try not to be that. So I am prepared to concede that there is corruption everywhere in government; it is a matter of scale and extent, and I am never going to say that I can swear that every single Minister in my Cabinet is … pure. I don’t mean by that to assert the contrary either; I have to be careful, but there is no way I will sit here in front of you and speak to the country and say no Minister of mine is guilty or ever been guilty of any kind of impropriety.”

Days later, Saldivar would be stripped of the Police Ministry because according to PM Barrow, “while I don’t have any scientific evidence for saying this, the optics made clear that the public perception is that it is untenable for Minister Saldivar to continue to head the police ministry in the current circumstances.”

(The foregoing quotes were obtained from Channel 7 archives.)