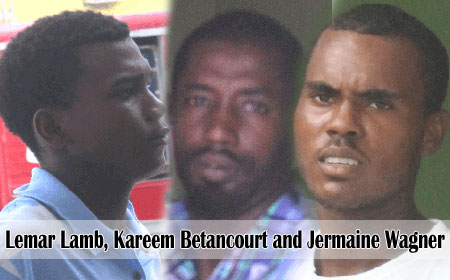 BELIZE CITY, Tues. Aug. 16, 2016–Three men appeared at the Belize City Magistrate’s Court this morning to be charged in connection with the robbery of a popular chef, Ainsley Castro, Sr.,who was held up at gunpoint at his businessplace, located in the Lake Independence area, last Friday, August 12.

Police charged Wagner and Betancourt with handling stolen goods, while Lamb was charged with burglary and robbery with a firearm of the businessman, popularly known as Chef Ainsley.

Lamb pleaded not guilty to robbery, but guilty to burglary. The court prosecutor, Inspector Hector Rodriguez, asked that the sentencing of Lamb for burglary be delayed until the robbery charge against him is heard, because the prosecution has strong evidence against him for that offense, which is the more serious offense and also carries a prison term.

Lamb could not be granted bail, since the robbery is alleged to have been committed with a firearm; his other two accomplices, however, were both granted bail of $600 each plus one surety of the same amount.

All three are expected back in court on September 28.

The handling stolen goods charge is based on the police’s claim that they found the men in possession of Chef Ainsley’s black LG touch-screen cellphone.

In regards to the robbery allegation against Lamb, police are alleging that on Friday, August 12, with the use of force whilst armed with a firearm, Lamb robbed from Chef Ainsley $800 cash in various denominations, $3,000 cash in $50 bills, Ainsley’s social security card, his driver’s license, his Belize Bank and Atlantic Bank ATM cards, his black LG touch-screen cellphone valued at $500, and a 14-karat gold chain with a cross valued at $1,000, all of which had a total value of $5,300.00.

In his report to police, Chef Ainsley said that on Friday, August 12, at about 1:30 p.m., he was inside his kitchen, located on LaCroix Boulevard, when three men entered and one of them was armed with a firearm.

Chef Ainsley told police that the man with the firearm held him up and demanded that he hand over all he had in his possession, and fearing for his life, he complied with his attacker.

Chef Ainsley said that while the gunman held him at gunpoint, two other men stole the items he had in his possession then all three men escaped.

Two days after the armed robbery, an investigation by police led them to detain Wagner, Lamb and Betancourt, who were found in possession of Chef Ainsley’s black LG touch-screen cell phone.

In court, while bail could not be granted to Lamb, prosecutor Rodriguez asked that conditions be set on the men since the businessman, Chef Ainsley, is well-known to them and the police are fearful that Betancourt and the others may try to interfere with him if granted bail without strict conditions.