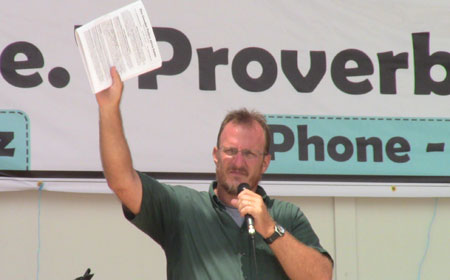 BELIZE CITY–Officials of the church community in Belize met Friday, October 3, with a delegation led by Prime Minister Dean Barrow in Belize City in an attempt to resolve their differences over the Revised Gender Policy (2013), which sparked national street protests by religious groups opposed to provisions in the policy which they contended were clearly engineered to pave the way for a foreign-backed agenda to establish mainstream rights for the Lesbian, Gay, Bisexual & Transgender (LGBT) community here in Belize.

During Friday’s meeting, the parties struck an accord on how gender would be defined. In the 2013 policy, gender is fluidly defined as: “The social constructed roles allocated respectively to women and men in particular societies and in particular historical and cultural contexts. Such roles, and the differences between them, are conditioned by a variety of political, economic, ideological and cultural factors and are characterized in most societies by unequal power relations.”

Pastor Scott Stirm of Belize Action, one of the representatives on the church delegation, told Amandala that their group proposed that gender should be clearly defined as male and female only, according to the Rome Statute definition used by the International Criminal Court, which says that gender refers “to the two sexes, male and female, within the context of society.”

Stirm said that the Government agreed to this definition of gender.

“The most important thing for us is that gender is nailed down clearly as male and female,” Stirm stressed.

That clarification, he said, really took care of half of their concerns with the Revised Gender Policy.

The next big issue was the question of sexual orientation being included in provisions which spoke of diversity in Belize. The term “sexual orientation” would be changed to “sexuality”, the parties have agreed.

Stirm said that the church community also took issue with provisions in the policy which grouped homosexuals (or men who have sex with men – MSM) along with the elderly and the disabled as vulnerable members of the Belize population.

They did concede, as maintained by the Government, that there is a challenge faced by the homosexual male community, which suffers a disproportionately high incidence of HIV/AIDS. Both parties agreed that it is a public health concern which has to be addressed, and so the revised policy would specify the need for measures to provide support for the disabled and the mentally challenged, and the elderly, as well as other high-risk vulnerable groups, such as homosexual men.

The parties also discussed the recently introduced provisions for special legal and infrastructure measures to protect the rights of vulnerable groups, including homosexuals and transgender persons. Stirm said that those clauses have “all been scrapped…” and the provisions will now speak to special mechanisms to ensure the safe delivery of healthcare to all Belizeans.

He said that by the end of the month, the Government plans on returning with the revisions in black and white, detailing what they had agreed upon.

However, Stirm said that there are two huge areas which have still not been resolved: the sexual reproduction health program and the health and family life education curriculum. He said that the parties plan to undertake a consultation on these live issues.

The church representatives have questions about what the Government plans in terms of adolescent access to sexual reproductive health information and services.

“Are we talking about abortion, the morning after pill, contraceptives to adolescents (ages 10-19)… morning after pills to 12-year-old girls?” he questioned.
Stirm said that he is very concerned about a recent CARICOM report on teen pregnancy and the age of sexual debut.

In Friday’s meeting were three representatives from the Belize Council of Churches and four from the Evangelical Association of Belize.

On the Government delegation led by Prime Minister Barrow were Ministers Godwin Hulse and Joy Grant, and Judith Alpuche – the Chief Executive Officer in the Ministry of Human Development, as well as a representative from WIN (Women’s Issues Network) Belize.

Roosevelt Papouloute of the Belize Council of Churches told 7 News that one of the concerns they had was whether or not accepting the Revised Gender Policy would lead to changes in the Belize Constitution, and they were assured by Barrow that there will not be changes to the Constitution in this regard.