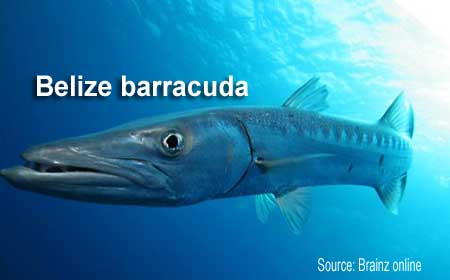 BELIZE CITY, Wed. Aug. 23, 2017–Each year, between 10,000 and 50,000 people who live in or visit tropical and subtropical areas suffer from Ciguatera Fish Poisoning (CFP), which is said to be the most frequently reported seafood-toxin illness in the world, according to an article published in the US National Library of Medicine, National Institutes of Health.

Ciguatera poisoning—which causes symptoms such as tingling and numbness in fingers and toes, around lips, tongue, mouth and throat; nausea, vomiting, diarrhea and/or abdominal cramps; joint pains and headache; and breathing difficulty—has also been reported in Belize, and over the past four days, two alerts have been issued by the Ministry of Health in Belize, following reports of cases cropping up, which have been linked to the consumption of barracuda fish.

In the first alert, issued on Friday, August 18, 2017, the Ministry of Health reported that “suspected fish poisoning (Ciguatera poisoning) was detected in persons that had eaten fish bought from a fish vendor in Ladyville, Belize District.”

In the second alert, issued on Tuesday, August 23, the Ministry said that 2 further cases of suspected Ciguatera poisoning, linked to the consumption of the large predatory fish, had been identified.

“Investigations conducted so far reveal that the barracuda fish from the Turneffe Islands area has been the sole carrier of the ciguaxtoin or poison,” the alert said.

It warned that toxic fish does not have any odor or taste and cooking and freezing does not eliminate the toxin.

According to the US Center for Disease Control (CDC), ciguatera fish poisoning (or ciguatera) is an illness caused by eating fish that contain toxins produced by a marine microalgae called Gambierdiscus toxicus, associated with corals.

Whereas the barracuda is believed to be the culprit for the most recent bouts of illness caused by the toxin, other fish may also carry the toxin, including coral trout, red snapper, donu, parrot fish, grouper, Spanish mackerel, red emperor, wrasse, reef cod, sturgeon fish, trevally and moray eel.

“Anyone who consumes fish contaminated with the ciguatera toxin will become ill,” the Ministry’s alert said, adding that, “The gastrointestinal or stomach symptoms normally appear within 24 hours of exposure and those of the nervous system can appear one to two days later.”

Although some symptoms may last only a few days, in some cases, the toxin can continue to affect those who ingest it for months.

The CDC says people who have ciguatera may find that cold things feel hot and hot things feel cold.

The Belize Ministry of Health has shared some guidelines for reducing the risk of CFP. It advises the following:

Avoid eating larger reef fish that have a greater likelihood of carrying ciguatoxins, especially the barracuda. Limit the weight of a fish to less than 11 pounds, as ciguatera fish poisoning occurs more frequently in larger fish. Eat other types of fish not listed above.

Avoid eating the head, roe or fish egg, liver, or other organs of the fish, as it is where the highest level of toxin is present.

The Ministry of Health calls on the general public to report any suspected fish poisoning to the local Public Health Officer so necessary action can be taken to prevent it.