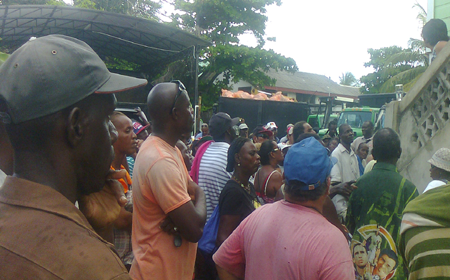 BELIZE CITY–Yesterday, January 15, the Belize City Council’s contract with the sanitation company known as the Belize Maintenance Limited (BML) officially expired, signaling the end of that company’s responsibilities of cleaning up the Old Capital.

Although he has maintained that it will be no easy task, two weeks ago, Belize City Mayor Darrell Bradley announced that he and the Council had drafted a plan to absorb the employees of BML, and as a result, 158 of BML’s sanitation staff today reported to City Hall as full-time employees with security of tenure under the newly implemented Municipal Regulations Policy, which was rolled out for personnel from all municipalities in mid-December 2014.

As part of their introduction, the new City Hall employees participated in an all-day orientation in which they met with Bradley and other key members of the council who outlined their rights and obligations as full members of staff.

When that session concluded, the Mayor – who had initially balked at the addition until Central Government lately stepped in to provide the Council with further assistance to maintain the transition –told the media that his chief concern as to the sustainability of these new staffers, is the wage bill that City Hall will have to pay.

According to Bradley, all 158 persons are being treated as “important and welcome” additions to the City Council staff, but, as with any other place of employment, each new worker has a probation period, which will last for 6 months.

At that time, each of the 158 employees will be assessed to ensure that they are performing up to the standards required to justify their continued employment, and the mayor assured that that evaluation will be completely transparent, since the Christian Workers Union, who will now act as the workers’ representative, will be invited to oversee that each employee is assessed in a fair manner.