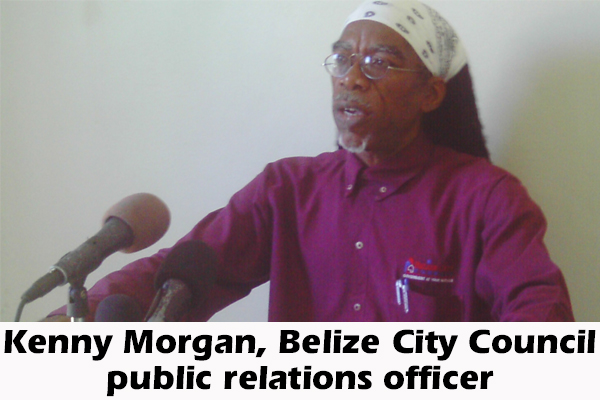 The recent rains over the past few weeks have undeniably caused considerable damage to a number of Belize City streets, and the Belize City Council is moving with a sense of urgency to remedy the situation.

Motorists have not only had to dodge monstrous potholes on many streets in order to reach their destinations, but drivers are also complaining that they have had to dig deep in their pockets to pay for continuing damage done to their vehicles.

The street works – which are scheduled to commence as early as tomorrow morning – will result in some inconveniences for drivers who use the two main arteries to come into the Old Capital.

This afternoon, the Belize City Council’s Public Relations Officer, Kenny Morgan, briefed the media on the degree of work that will be done, and how city residents will be affected. Morgan said, “Two intersections will be affected; one being our present location at the corner of Partridge Street and the George Price Highway. The entire section between the Lord Ridge Cemetery and Partridge Street to its junction with Vernon Street will be worked on starting tomorrow morning at 10:00 a.m.”

He told us that that particular portion of the road will be concreted, and during the course of the works, traffic will be diverted through Western Avenue and Mahogany Street. The heavy duty vehicles, such as the delivery trucks and trailers, will be mainly diverted through that route. Morgan said, “What we will do is to utilize Vernon Street as the entry and exit point so that we do not have congestion with the traffic that is moving in and out of the George Price Highway.”

According to Morgan, the area will be closed for two weeks. Whether or not that portion will be completed within that time period is dependent on weather conditions. Morgan told the media that works are also expected to start at the Flag Monument located at the roundabout at the beginning of the Philip Goldson Highway at the northern entrance to the city.

He said, “This is a project that will have significant impact on the motoring public, and we are trying to work it out in a way so as to not make the situation be too hard on the public. While the works are ongoing at the Flag Monument, a lane will be kept open so as to facilitate the flow of traffic in and out of the city, but we are asking motorists if it is not absolutely necessary for you to enter into that area, try to use alternate routes, such as St. Thomas Street and Coney Drive. We are asking the motoring public to please cooperate with us as we get these projects started. We have also received word that the concreting of Baymen Avenue should be completed within the next week or so, but one problem we are having is with the material. Because of the rains that we have experienced, folks at the quarry are having difficulty sourcing the aggregate. The Flag Monument has one third of the aggregate already; however, we are awaiting word from the quarry regarding the material.”

Morgan said that there are many more streets that need repairs, but at this time City Hall is focusing on the primary streets in greatest need of attention. He also asked motorists to work along with the traffic officers to ensure the free flow of traffic.